Campaigners against cuts to staff and courses at London College of Communication have staged an occupation of the main lecture theatre at the Elephant & Castle campus. 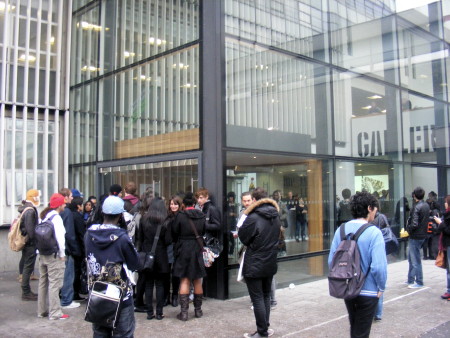 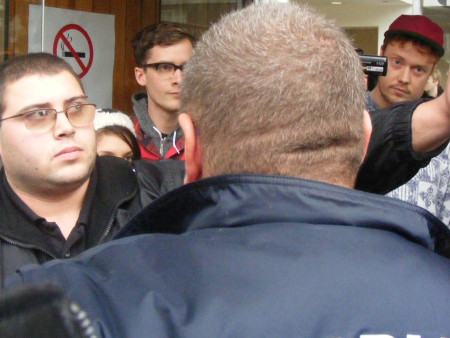 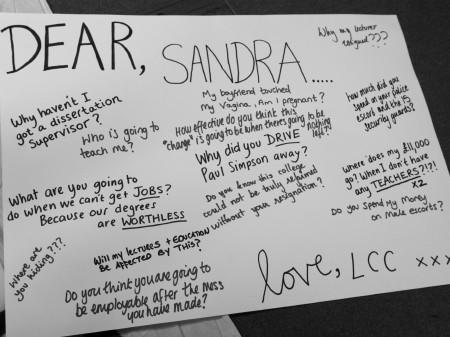 The campaigners pose their questions for head of college Sandra Kemp 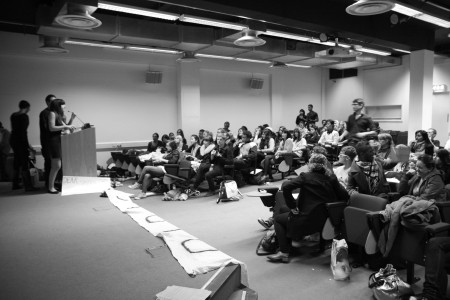 Inside the occupied lecture theatre

Members of the Oppose LCC Course Redundancies campaign occupied the lecture theatre on Monday evening and remained there until Wednesday afternoon when they decided to leave peacefully.

The occupation was led by LCC graduate Joana Oliveira Pinto and a number of current students concerned about the impact of staffing cuts announced earlier this year.

The campaigners claim that more than 180 jobs have been lost as a result of the shake-up and that remaining staff are left overstretched and courses under-resourced.

Police arrived at the the Elephant & Castle college building at about 2pm on Wednesday.

Once a police sergeant had entered the building, the doors were locked by private security staff who prevented staff and students from either entering or leaving the building.

One frustrated student asked how she was supposed to get to her lesson. "You can't", replied the security officer.

Students who asked why the doors were locked were told simply that the instruction had come from "management".

For about an hour access was severely restricted but eventually the doors were reopened.

"London College of Communication is seeking a resolution to the current situation," said Sandra Kemp, head of college.

"As always, our priority is to ensure the college runs normally and that students are not affected adversely by any disruption.

"In 2009, London College of Communication needed to make significant savings to Balance the budget. The entire course portfolio was reviewed and a new mission for the college adopted – "connecting the world through teaching, practice and research in media, design and communication".

"As a result of this review, 16 courses were identified for closure. By focussing on the college's core subject areas, the college's reputation will be enhanced and resources will be better directed to students and courses.

"Great care was taken during the review to ensure all correct procedures were followed. The college has established a number of ways in which students affected by the restructuring can raise their concerns directly with staff. We encourage our students to use these routes rather than the current action."

Last week Paul Simpson, course director of the BA in public relations, resigned in protest at the LCC cuts.