Defeat of ‘Hitler’s secret weapon’ remembered on board HMS Belfast

A tribute has been paid on board HMS Belfast to the late John Ouvry who saved the ship from destruction and Britain from possible surrender to the Nazis. 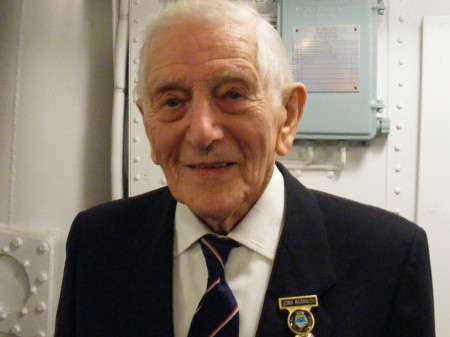 Among the guests at a 70th anniversary reception on Thursday was 95-year-old John Harrison who was on the cruiser in 1939 when it was rocked by a mysterious underwater explosion in the Firth of Forth. He was thrown 16 feet.

However, that explosion threatened not just the ship and its crew but Britain's capability at the outbreak of the Second World War.

The solving of the mystery by Commander John Ouvry was praised at the reception by his colleague Lieutenant Noel Cashford.

He described the day after HMS Belfast had been hit when he saw objects attached to parachutes dropping in the Thames estuary. He alerted the Admiralty and John Ouvry went out on to the mud flats to inspect what he believed was "Hitler's secret weapon". Lt Cdr Roger Lewis took a rubbing of its ring using the page of a signal pad.

This was used to make special brass spanners and when the tide fell again the next morning Ouvry slowly defused the bomb. Lewis stood by to take over working on a second bomb should there be an explosion.

They turned out to be magnetic mines and the same as the one that had damaged HMS Belfast.

These mines were intended to cut London off from its food supplies arriving at the docks by disabling every ship.

Ouvry reported at once to Winston Churchill who said: "We owe a great deal to the public spirit of Lt Cdr Lewis and his colleague Lt Cdr Ouvry who have been up against it today".

At the anniversary gathering John Ouvry's son David Ouvry acknowleged that his father's work between tides in Thames estuary had been "of profound importance to the nation in the early months of the war".

Speaking also for his two brothers he added: "We are very proud of a man who was a modest and self-effacing father."

Cdr Peter Greenwood, commanding officer of the Fleet Diving Squadron, said: "Let's remember the bomb disposal teams in Afghanistan who, like John Ouvry and others who have followed him, are willing to take that long and lonely road in order to deal with devices for the peace and stability of the world."

The magnetic mine disarmed by John Ouvry is preserved and on show on board HMS Belfast today.

• John Harrison's account of what happened on HMS Belfast when the magnetic mine detonated is featured in the Outbreak 1939 exhibition at the Imperial War Museum.