Town crier Peter Moore, who died at the end of last year, has been honoured with a posthumous lifetime achievement award at the Southwark Civic Awards. 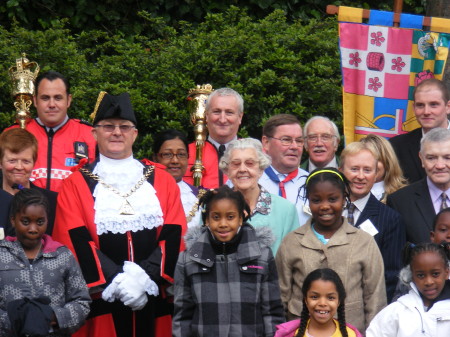 Peter Moore died in December 2009 and his funeral mass was held at St George's Cathedral a few weeks later.

The award was presented by the Mayor of Southwark Cllr Jeff Hook and collected by Peter's son Jamie. The citation for the award, read by the civic marshal, said: "Peter was a visible spirit of Southwark, and a tangible demonstration of its pride in its history and heritage. He added a real sense of occasion to every event he attended."

As well as his involvement in the Southwark Civic Association and Southwark Chamber of Commerce, Peter was also instrumental in the revival of the Remembrance Day ceremony at the Southwark War Memorial in Borough High Street.

Other winners of this year's Southwark Civic Awards included the Muslim Association of Nigeria which runs the Old Kent Road Mosque. The association received the liberty of the Old Metropolitan Borough of Bermondsey.

According to the citation: "As well as worship and religious teaching, the leaders and members of the association are active in inter-faith work as well as education and community work.

The Manna Society, which runs the Manna Centre for homeless people near London Bridge, also received the liberty of the old Metropolitan Borough of Bermondsey.

The same award was given to Steve Hiser, who has been a coach at the Fisher Boxing Club for the past 40 years. His pupils have included former champion Lloyd Honeyghan.

The liberty of the old Metropolitan Borough of Southwark was awarded to Carol Garvey of the Dodson and Amigo Tenants' and Residents' Association in Waterloo. The citation noted that she "has the rare quality of always putting the next person first".