Around 300 DVDs and some computer games were stolen from John Harvard Library in Borough High Street during a break-in early on Sunday morning. 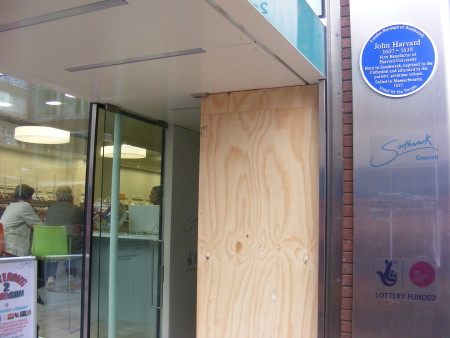 "It's shocking that there is a small section of society that believes it is OK to steal and cause this kind of damage to public property, and we'd like to remind them that stealing from libraries is stealing from the public purse and will not be tolerated," says Cllr Lewis Robinson, Southwark's executive member for culture, leisure and sport.

"Thanks to our building alarms the thieves only got away with a selection of DVDs and computer games. The police are currently carrying out their investigation and we have handed over our CCTV footage to assist them.

"The library is still open for business and we have increased security measures while we repair the damage to the building."

Library usage up since revamp

John Harvard Library reopened in November after a Lottery-funded refurbishment. Figures released last week show that 11,276 items (books, DVDs etc) were issued to borrowers in December 2009 compared to 7,115 in December 2007.

"The comparative data shows that item issues have increased 58 per cent; visitors to the library have increased by 11 per cent and new borrowers are up by a tremendous 223 per cent," Cllr Lewis Robinson said in response to a question tabled by Cllr Mackie Sheik.

"I am very pleased with the refurbishment works and the new and improved features of the library, which include extended opening hours, increased study space and more public access PCs, an improved stock collection, blu-ray films and a vibrant refreshment area.

"At the launch of her consultation on the future of library services, the culture minister, Margaret Hodge, even went on to praise the refurbished library as a 'stunning exemplar' for the rest of the country. I am pleased to report that Ed Vaizey, who will hopefully be the next culture minister, also attended and was equally impressed."