HOPE not hate: countering the BNP in South Bermondsey 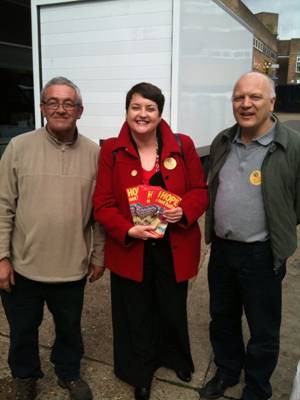 HOPE not hate is Searchlight's anti-racism and anti-fascism campaign.

The activity in South Bermondsey was prompted by the recent delivery of a British National Party leaflet in the area.

"When we were approached by local residents to help them put together a positive message that they could deliver to their community, we were only too happy to help," said Ian Ritchie of Southwark Unison.

"I was delighted that we could include a positive message from 'Millwall for All' in the leaflet."

Local churches and faith groups supported the activity, and there were enough people to allow Andy Wilson from Salmon Youth Centre to lead a small group up to the Blue Market.

"We spent two hours up at the Blue handing out leaflets and chatting to local shoppers," said Andy.

"The positive response we got was fantastic, people were really glad we were out countering the BNP's negative messages."

The BNP received a total of 343 first and second choice votes in South Bermondsey ward at the London mayoral election in 2008.

Australian Steve Tyler is expected to be the BNP's parliamentary candidate in the Bermondsey and Old Southwark constituency.

It is the first time since 1997 that the party has contested the parliamentary seat, although the National Front had candidates at the 2001 and 2005 elections.