The Amano cafe-bar at Bankside's Blue Fin Building has reopened after a 15-month closure but the Viva Verdi prosciutto bar has shut down. 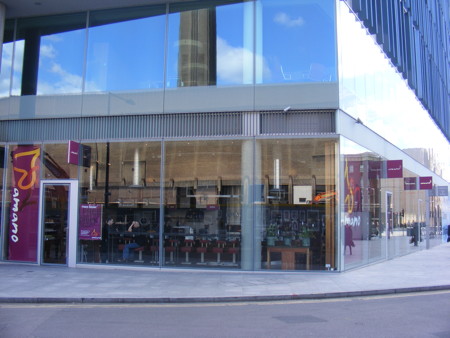 Amano's branch at Bankside Mix closed for the Christmas holiday in 2008 and failed to reopen in January 2009 when the company was placed in administration.

Amano was acquired by Rondanini, a Herne Hill-based importer and wholesaler of Italian food, who continued to operate the original Clink Street branch and Parkside kiosk next to City Hall.

Meanwhile the Sumner Street premises were stripped bare and remained vacant for more than a year.

For the past few months the interior of the store at the base of the Blue Fin Building has been refitted and the store finally opened its doors last week serving Amano's trademark flatbreads.

Since Amano's last attempt at making a success of the Sumner Street location the offices at Bankside 2 and 3 have been fully occupied by RBS and the Neo Bankside development across the road is now in full swing.

Round the corner in Canvey Street the Viva Verdi wine and prosciutto bar has recently shut down.

The bar, with its striking design by Maria Sole Cortese, opened in early 2008 and was relaunched under new management last summer.

Viva Verdi Ltd ceased trading in February and a creditors' meeting was held on 1 March.

Another Bankside Mix-based business, the Tsuru sushi bar, is expanding and has just opened its second branch in Bishopsgate.