New transport minister Norman Baker opened new bike racks at Waterloo Station on Tuesday morning - the first part of a new 'cycle hub' to be created at the terminus. 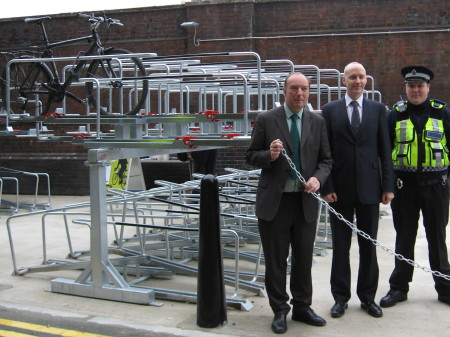 The new £200,000 double-decker cycle parking on the taxi road has increased the number of spaces at Britain's busiest station from 212 to 534.

Former transport secretary Lord Adonis had pledged to improve cycle parking at stations to make it easier for people to combine cycling with public transport.

"It's vitally important we make the beginning and end of people's journeys as simple as possible – that's the couple of miles from home to train," says Norman Baker, the new Lib Dem transport minister.

"More and more commuters are wanting to cycle to the station which is why expansion of cycling facilities, like this Government funded project at Waterloo, are so important.

"And of course better cycling facilities at stations not only helps tackle congestion and promote rail travel but will also help people develop healthier lifestyles and protect the environment."

To mark the opening of the new facilities, the British Transport Police (BTP) held a free surgery to give cyclists advice on how to cycle in London safely and keep their bikes safe. People also had the opportunity to have their bikes tagged to help identify them in the event that they are lost or stolen.

The new cycling facilities at Waterloo are located outside the entrance in the centre of the main concourse (next to Costa Coffee ), providing quick and easy access between the station and the existing cycle path.

The new cycle parking facilities are the first phase of the planned creation of a cycle hub at Waterloo. Plans for the second and third phases of the work are being developed.

Network Rail's Mike Goggin added: "The new bike racks at Waterloo are safe, secure and easy to use. These new facilities will help more of those choosing to cycle to and from the station to do so more easily, which in turn will help reduce demand on the tubes and buses.

"As the number of passengers using the railway continues to grow and cycling remains popular, we have put in place a substantial programme to improve cycling facilities in London, including the creation of cycle hubs at the Capital's two busiest stations.

"We will continue to look for ways to make it easier for passengers to combine environmentally-friendly forms of transport, which will help relieve congestion on the roads and on other forms of public transport."

Three CCTV cameras and floodlights have been installed to provide better safety and security for passengers and cyclists. Existing cycle parking facilities on the platforms will remain.

"We would also ask members of the public to remain vigilant and to report any suspicious activity near cycle racks to a member of rail staff or police," says Chief Inspector Richard Douce of British Transport Police.