110 people from 41 voluntary groups were last week given a Southwark Stars award by Volunteer Centre Southwark at a ceremony held in the Shunt Lounge at London Bridge. 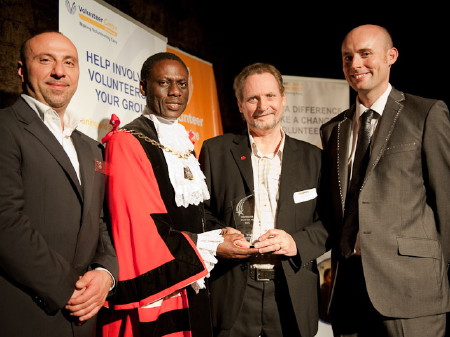 Deputy Mayor of Southwark Cllr Lorraine Lauder presented the awards to people who have done more than 100 hours of volunteering in the last 12 months.

Collectively the award recipients had volunteered for more than 26,000 hours in the past year.

Five people were named volunteers of the year and given awards by the Mayor of Southwark, Cllr Tayo Situ.

Usually only one person is given this accolade, however this year the standard of nominations was very high and the panel decided to give five awards.

One of those to receive the top award was David Johnston who has volunteered at Blackfriars Settlement since 2003.

He uses his holiday time to accompany Blackfriars' visually impaired group of very vulnerable older people who need one to one volunteer support on their annual weekend away and uses his dynamic personality to make it an enjoyable time for this isolated group.

As a befriender for five years, David has been visiting two isolated older people with challenging behaviours each week.

Nominating him for the award, staff at Blackfriars Settlement described him as "the life, soul, clown and star of our older people's volunteers".

"I love Southwark and love living in the borough. However there are lots of different issues from gang crime to high unemployment and isolated older people. Volunteers are key to making the area a better place to live in and to trying to get things to change for the better.

"These Southwark Stars awards are a small part of celebrating the work that volunteers do, and saying thank you to the thousands of people who volunteer locally.

"It was great to meet so many amazing people and I am always so humbled to see how much people give to help others. It takes a lot to volunteer, and it can be a thankless task.

"Southwark Stars is our little way of saying thank you and shining the spotlight on people who do so much."