German pizza and pasta chain Vapiano is looking to open its second UK restaurant at the Bankside Mix development on Southwark Street. 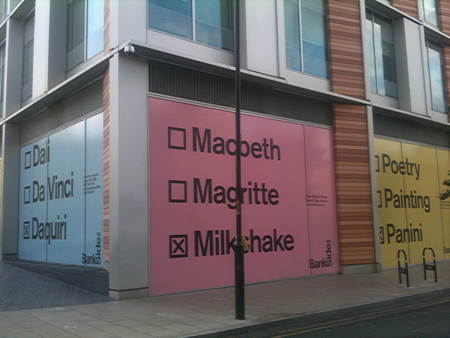 The Hamburg-founded restaurant chain, which has more than 30 outlets worldwide, describes itself as the creator of the "fresh casual" niche in the hospitality industry.

Vapiano 's only UK restaurant to date is located in Great Portland Street.

On arrival diners are given a 'chip card' which is used to record food and drinks which are ordered at dedicated counters for pasta, pizza and salad. Customers present their chip card at the till and pay on departure.

Developer Land Securities has applied to Southwark Council for change of use of the large empty shop unit next to M&S Simply Food at the corner of Southwark Street and Great Guildford Street. The unit is on the ground floor of one of the two office buildings occupied by the Royal Bank of Scotland (RBS).

Under the original planning permission granted for the the Bankside 123 development in 2003, the unit is restricted to class A1 retail use. The condition was imposed by the council to ensure a range of different types of shops in the new development.

Land Securities argues that the unit has proved impossible to let to retailers and a restaurant would bring vitality to a quieter corner of their development.

Documents submitted with the planning application indicate that shop chains including Boots, Cycle Surgery, Sven Christian, Dwell and Dreams all expressed interest in the unit but ultimately didn't sign up because of its secondary location.

In 2007 Marstons made an offer to Land Securities with a view to opening a bar but this was turned down because a bar – The Refinery – was already proposed elsewhere in the development.

Land Securities has recently repossessed two units at Bankside Mix – the failed Viva Verdi Italian restaurant in Canvey Street and the never-occupied Lavanta Galleria unit between Crussh and O'Sullivan's on the Sumner Street frontage of the Blue Fin Building.

As well as the planning application (10/AP/1477), Vapiano has applied for a premises licence (832601) for the proposed restaurant and bar.

The location is within the Borough and Bankside saturation zone for new alcohol licences and is likely to draw concern from neighbouring residents as it is located much closer to homes than any of the restaurants and bars that have so far opened at Bankside Mix.