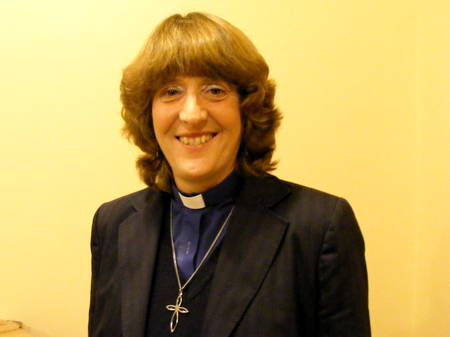 Rosemary Fletcher comes to Lambeth as a result of a meeting with Jenny Impey last October in Colombo. During the last five years Rosemary and her husband James held appointments at a Sri Lankan theological college for Anglican and Methodist students. Rosemary was teaching whilst James was the development officer and English teacher.

North Lambeth parish is unusual in having a covenant agreed between the two churches.

The minister will also be Superintendent of the Methodist North Lambeth Circuit.

"Rosemary is not here to do it alone," Jenny Impey warned the congregation. "It depends on each one of you to play your part in that body of Christ because nothing less is good enough for the people of these communities."

She reflected that many in London communities do not know the names of neighbours let alone what is happening in their lives. Turning to Rosemary she said: "Come among us as one who builds relationships."

The Archdeacon of Lambeth, the Ven Chris Skilton, was present to read the formal notice of appointment by the Bishop of Kingston who is acting Bishop of Southwark.

The congregation included friends from Reading where Rosemary served as minister in the late 1990s.

James Rowley, the new minister's husband, is now looking for employment in London.