The London Fire Brigade's Southwark training centre is the nerve centre for the private emergency fire service protecting the capital during the latest strike by members of the Fire Brigades' Union. 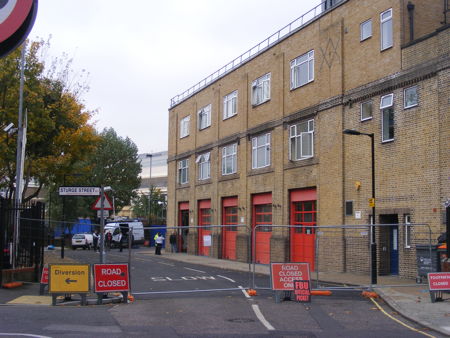 Fire Brigades' Union members in London were taking industrial action between 10am and 6pm on Monday, with further action planned to coincide with Bonfire Night at the end of the week.

Sawyer Street, which divides the two halves of the training centre site, is closed to traffic and pedestrians and there is a visible police presence in the area.

The London Fire and Emergency Planning Authority has a five-year £9 million contract with AssetCo to provide a back-up fire service in the capital.

"The London Fire Brigade's contingency plans have, for the second day of FBU strike action, been rolled out on schedule," said a fire service spokesman.

"All 162 contract staff providing the fire and rescue service in the capital today are either now available or waiting to be deployed from the brigade's training centre in Southwark.

"During the day 27 fully crewed appliances will operate, responding to 999 calls received."

The dispute centres on the threat made by fire brigade bosses to sack and re-hire every firefighter in London if they fail to agree to changes to shift patterns.

The employers want to introduce a longer day shift and shorter night shift which they claim will allow more time for training and community fire safety work.

The FBU fears that the changes to shift patterns will be a precursor to cuts in overnight fire cover in London.

Speaking in the House of Commons last week, Simon Hughes MP said: "As somebody who has in their constituency the London Fire Brigade headquarters, three fire stations and a fire training centre, and who has met both management and the unions in the past fortnight, may I ask that the message be passed on, first, that most fire officers are really keen that there be a resolution, because they do not want to go on strike, and secondly that on the shift patterns, there is not much objective distance between the management and the unions?

"It should be capable of resolution. I want to add my voice to those who say that there is a way forward by negotiation rather than this clearly unwanted industrial action, which would affect the whole city."