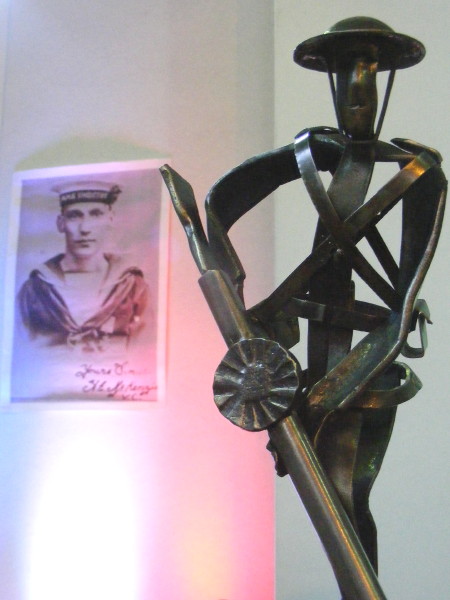 The Princess Royal will officially open the new gallery on Armistice Day.

The new permanent Extraordinary Heroes exhibition has been paid for by a £5 million donation from Lord Ashcroft whose own collection of 164 awards for gallantry has been put on display alongside the 48 Victoria Crosses and 31 George Crosses already held by the museum.

One of the stories told in the new gallery is that of Bermondsey boy Albert McKenzie, whose George Cross – awarded for his part in the St George's Day raid on Zeebrugge in 1918 – has been on loan to the IWM for a decade.

"Albert McKenzie is a great story for the Imperial War Museum because it's such a local story for us," says principal historian Nigel Steel.

"There are so many nice touches to it: he was a young lad, only a teenager, and we know for a fact that he wasn't a perfect boy.

"He came out of the [Oxford and Bermondsey] Club and got into trouble in the Navy, but when push came to shove he was incredibly brave and showed great dynamism when he went up the Moll at Zeebrugge.

"He comes back, gets the VC by ballot – so he's chosen by his peers as the best and most deserving – he gets to Buckingham Palace, he's awarded his Victoria Cross by the King while he"s still on his crutches, and then tragically catches flu and dies only a few weeks later."

Earlier this year a campaign was launched to raise funds to build a memorial to Albert in Bermondsey. A new housing block at Bermondsey Spa will also bear his name.

The touch-screen displays in the Lord Ashcroft Gallery include images of the proposed memorial designed by Forge Architects and local blacksmith Kevin Boys.

The appeal aims to raise £100,000 to construct the memorial at the junction of Tower Bridge Road, Decima Street and Bermondsey Street.

• Find out more about the appeal at www.albertmckenzievc.com