The Barclays Cycle Hire docking station outside the Strata tower at Elephant & Castle has been out of order for nearly two months after street lighting contractors damaged vital cables. 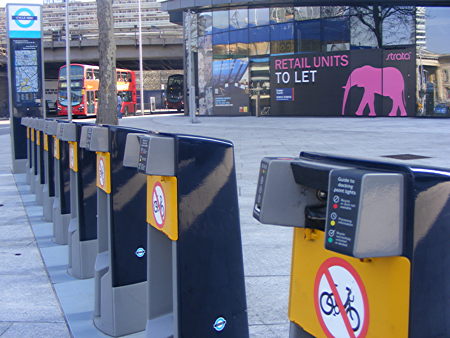 The station, which has 21 docking points, was closed in late January. Since then the official TfL docking station status page has warned users that it is "out of service until further notice due to an electrical fault".

This week the reason for the extended delay was revealed in a written answer from Mayor of London Boris Johnson to a question tabled by Lib Dem London Assembly member Caroline Pidgeon.

"The docking station at Strata has not been available to the public due to an electrical issue," said the Mayor.

"This was caused by a contractor working on street lighting damaging the cycle hire cables making them inoperable.

"We are working with our suppliers to coordinate the reinstatement of the power supply as soon as possible."

The extended closure has put extra pressure on the nearby docking station outside the Elephant & Castle Shopping Centre.