Public consultation on proposed changes to the road layout at Elephant & Castle will begin later this month. 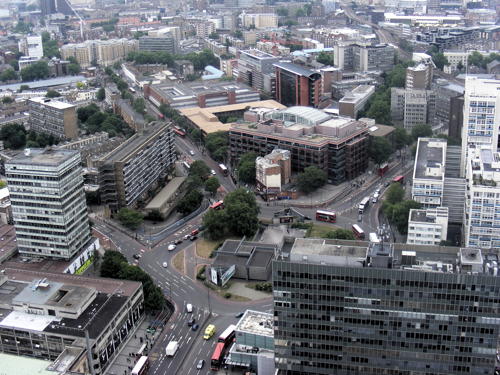 Residents got a sneak preview of the long-awaited plans at Saturday's meeting of Borough, Bankside & Walworth Community Council.

Emma Crittenden from Transport for London told the meeting that a "radically new road layout" is planned.

"The roundabout is one of the worst-performing junctions we have on our network," she said.

"It has a very high collision rate, there are upwards of 3,500 cyclists going through the roundabout every day, there's very limited cycling provision and the pedestrians have to navigate a complex subway system."

TfL intends to replace the gyratory system and subways with a series of signalised junctions with surface-level pedestrian crossings.

A new pedestrian space will be created between the shopping centre and the Michael Faraday memorial in the centre of the current roundabout.

The plans have evolved since a number of images were published last summer by Mayor of London Boris Johnson.

Under the plans to be released later this month, motor traffic would be unable to make the turn between Newington Causeway and New Kent Road in either direction.

TfL is also considering relocating the bus stops for buses towards Camberwell from their present location opposite the Metropolitan Tabernacle round the corner into Walworth Road, opposite the Strata SE1 tower.

As part of the consultation, members of the public will be asked to comment on two options for the northbound cycle lane in front of Metropolitan Tabernacle. One option is for a segregated lane to the west of the bus stops and the other is for an on-carriageway route passing to the east of the bus lane.

Transport for London will deliver thousands of leaflets to local residents to promote the consultation, as well as sending emails to holders of Oyster cards and Barclays Cycle Hire accounts with addresses in the area.

The consultation period begins on Monday 24 February and will run for about six weeks.

Drop-in information sessions are scheduled for Thursday 6 and Saturday 8 March at the London College of Communication.

The launch of the consultation will coincide with the tenth anniversary of the approval of Southwark Council's Elephant & Castle masterplan which included the first proposals for the 'peninsularisation' of the northern roundabout.

The meeting heard from Richard Reynolds of the Save our Subways campaign who is calling for retention of the subways as a safe, quick and direct route for pedestrians to move across the junction.

Reynolds also objects to the effective lengthening of the Inner Ring Road, with traffic heading from New Kent Road towards Newington Butts forced to travel much further under the proposed road layout.

A further consultation is planned for later in the year when TfL will ask for comments on the look and feel of the proposed new public space.

Plans for the new Northern line ticket hall and escalators will be the subject of a separate announcement next year.