With just over a week to go until the London Marathon, Southwark Council's leader Peter John has been busy putting in some final practice ahead of the gruelling 26.2 mile run. 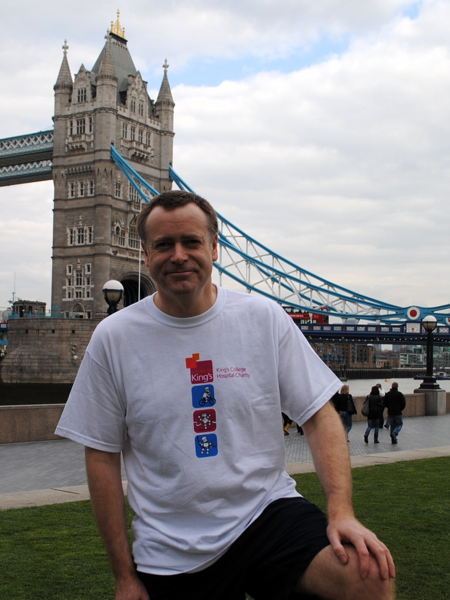 Councillor John – believed to be the only council leader in the country running this year's marathon – will be pounding the capital's streets on Sunday 22 April to raise thousands of pounds for charity.

He hopes to raise £5,000 for one of the Mayor of Southwark's chosen charities, the King's College Hospital rheumatology department.

For the last few months Cllr John has been following a strict training plan and completing up to 50 miles a week including 22 mile runs at the weekend.

Cllr John, 45, who last ran a marathon 10 years ago, said: "I feel fairly confident about my performance in the marathon and I'm really hoping to finish the course in three and a half hours – which will be a first for me.

"Almost £2,000 has been raised so far in sponsorship which is a great sum of money but I would really like to hit my target of £5,000. I'm asking those who have yet to make a donation to dig deep and help me make a real contribution to the hospital charity."

The Mayor of Southwark, Cllr Lorraine Lauder, said: "I'm absolutely delighted that Peter has decided to run this year's London Marathon and raise funds for the King's College Hospital Charity.

"On behalf of Southwark I would like to wish him good luck in his preparations for the race and encourage everyone to help him raise as much money as possible."

Friends, family members and colleagues will be present along the route to spur Cllr John across the finish line on Sunday.

Gillian Harris is running the marathon to raise funds for the £100,000 project to re-hang the bells of Southwark Cathedral and make them easier to ring. Find out more at www.virginmoneygiving.com/GillianHarrisBells

Last year Peter Valuks, master of the cathedral's society of bell ringers, carried out a 1,200-mile sponsored cycle ride in support of the same project.

Tower Bridge and the eastern end of Tooley Street will be closed to traffic from 8am on Sunday morning. Tooley Street should reopen at about 4pm but the bridge will be shut till 7pm.

Traffic will be able to enter and leave the Shad Thames area at the Tanner Street junction until 9.30am. The crossing point will reopen once the marathon's rear command vehicle has passed.

The Barclays Cycle Hire docking station in Curlew Street will be out of service on marathon day.

Local volunteers – including representatives of Downside Fisher Youth Club and the Arnold Estate Tenants' & Residents' Association – will be running a water station for marathon runners at the junction of Tooley Street and Tanner Street.

Entertainment on the SE1 section of the route includes the Southwark Concert Band and Wingit.

• While the marathon runners are making their way across Tower Bridge, look out for the London Kayakathon on the Thames below