Lambeth Council could take the owners of the London Eye to court if councillors veto the orange colour scheme recently applied to one of the wheel's 32 capsules. 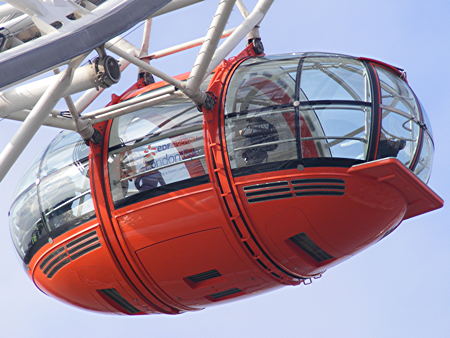 Lambeth's planning applications committee will next week decide whether to support a recommendation from planning officers to refuse consent for the repainting of one of the capsules of the London Eye in the corporate orange colour scheme of the wheel's new sponsor EDF Energy.

Papers published by Lambeth Council show that officers are unhappy with the new colour scheme applied to one of the wheel's 32 capsules when the attraction was relaunched as a the EDF Energy London Eye in January.

The council's conservation and design team says that "there is undoubtedly an adverse impact on the London Eye's unified composition" as a result of the repainting.

"The bright orange capsule immediately draws the eye and results in disruption to the symmetry of the circular structure," claim the conservation officers.

"In views of the impact on other important landmarks in the area, the orange capsule stands out as an anomaly in the landscape.

"The London Eye is an iconic building in an internationally recognised setting and our concern is that the changes are out of keeping with both the host building and the character and appearance of the surrounding conservation area and its significant views."

Lambeth planners are also concerned that the orange capsule is visible in a number of protected views, including those relating to the Westminster World Heritage Site.

Merlin Entertainments, which owns the London Eye, argues that planning permission is not required for its new colour scheme. It cites a 1998 planning appeal decision, relating to a Swindon branch of PC World, as evidence that the repainting can be carried out under permitted development rights because PC World's choice of purple paint for its store did not constitute an advertisement.

Planning officers claim that he repainting of the capsule from its original white/grey colour scheme to a distinctive orange colour is in breach of the terms of planning permission granted in 2002 for the retention of the observation wheel on the South Bank for 25 years. A condition was attached to that decision which says that "no advertisements shall be displayed on the London Eye, County Hall or in the immediate area without the express consent of the local planning authority".

Lambeth officers concede that the repainting of an unlisted building such as the London Eye does not normally require planning or advertisement consent, no matter the colour chosen.

The officers' report says that "this element of the scheme is considered to constitute an advertisement on the basis that a third party, in this instance EDF Energy, have paid to have their brand, including their main corporate colour of orange (Pantone 172), associated with a highly visible and iconic structure of the London Eye.

"The sponsorship deal and financial transaction involved means that this display of EDF Energy text, logos and corporate colours on the London Eye structure works in the same way as standard 'billboard' style advertising where a third party pays a land or building owner to display an advertisement in a prominent location, to project their brand or product within the public domain."

If Lambeth's planning applications committee endorses the officers' report, the council's draft decision notice advises Merlin Entertainments to remove the orange paint from the capsule within 28 days otherwise the matter will be referred council's legal services department "to instigate prosecution proceedings against those responsible".