Church of England and Roman Catholic bishops are confused about the Big Society, claimed Archbishop of Westminster Vincent Nichols during a visit to Southwark on Monday. 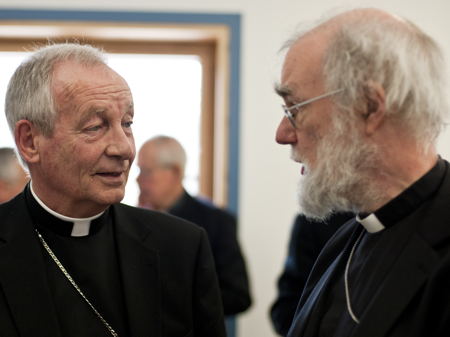 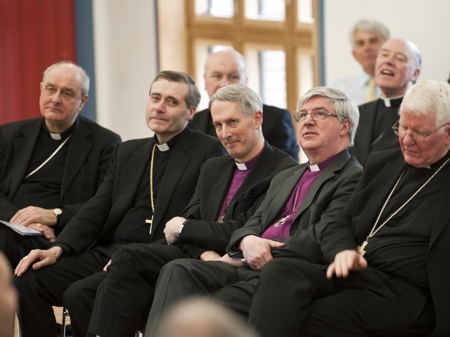 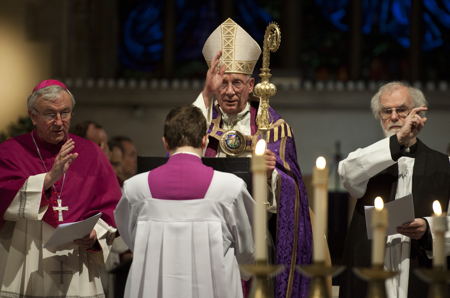 The Archbishops of Westminster, Southwark and Canterbury give the blessing at the end of Choral Vespers in St George's Cathedral (Photo: Mazur/catholicchurch.org.uk)

The Roman Catholic primate was speaking in Southwark's St George's Cathedral after the Anglican and Roman Catholic diocesan bishops of England had spent Monday meeting together at the Amigo Hall.

"There were expressions of confusion as to what exactly the Big Society means," said Vincent Nichols reflecting on the bishops' discussions.

"Is it about volunteering? Is it about the role of intermediate institutions in society?

"Is it about trying to reshape enterprise so that it has a much more openess to social development and social responsibility?"

The Archbishop reported anxiety about the impact of government spending cuts at both local and national level.

"There was a willingness to see ourselves engaged in these matters," he added.

"Our two churches put in enormous work into the wellbeing of the fabric of society.

"There was a genuine sense that this is an important moment. We shouldn't lose it through anxiety or cynicism.

"We do have a vision of how people work and live well in society and we'll play our part in that."

The Archbishop of Canterbury Rowan Williams, who mentioned the threat to youth services in some regions, said: "We hope that we get more strategic direction from government. We want some indication about what public services are so strategically important that they need ringfencing."

On the question of the Ordinariate, the new special provision for Anglican groups joining the Roman Catholic Church, Archbishop Williams said that there was very warm collaboration. "The routine work of contact and exchange between our two churches has gone on without in any sense being derailed. All of us are looking to see what the future holds."

Speaking for both primates, Archbishop Nichols stressed that the Ordinariate arrangements were not an alternative to ecumenism.

"What we want to see now is bishops working together locally," said the Archbishop of Canterbury.

The event, the sixth joint meeting, was hosted by the Archbishop of Southwark Peter Smith who was able to welcome his Anglican counterpart Christopher Chessun, newly appointed Bishop of Southwark.

The day ended with Choral Vespers during which the Roman Catholic Bishop of Plymouth and the Anglican Bishop of Exeter, whose Devon dioceses overlap, gave addresses.