Dozens of Southwark residents who have between them given more than 12,000 hours of voluntary service to local charities were honoured a special Volunteers Week award ceremony last week. 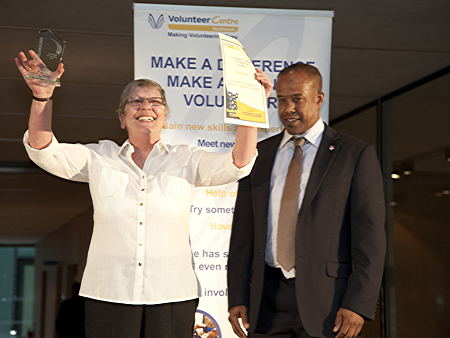 Pat Notton, chair of the Queensborough Community Centre, was one of those to receive the 'Volunteer of the Year' award.

"Pat is the inspiration for the Big Society," said the staff at Blackfriars Settlement who nominated her for the award. As well as her tireless work at the Queensborough, Pat is also part of the settlement's befriending scheme that trains volunteers to visit isolated local residents.

The same award was given to Jane Stokes who volunteers with Marshalsea Road-based charity Connect which provides support services and information for people with aphasia.

Now in its sixth year, the Southwark Stars awards scheme honours the borough's rich spectrum of voluntary activity and applauds the exceptional commitment of volunteers many of whom have overcome particular adversity, achieved community leadership positions or shown particular dedication to their roles.

The ceremony, held at Southwark Council's Tooley Street offices, was hosted by broadcaster Jumoke Fashola and the awards were presented by the Mayor of Southwark Cllr Lorraine Lauder and cabinet member Cllr Abdul Mohamed.

"This borough has fantastic talent partly because we are such a diverse community and actually the different cultures and backgrounds complement each other," said Simon Hughes MP.

"Some of the old skills in volunteering – looking after elderly neighbours have been done here by people who were born here lived here all their lives. I've seen people who have won awards in previous years for looking after our oldest resident in Southwark who is 111 – lives on her own independently , doesn't have live-in carers, doesn't have paid carers, but has people who are her neighbours going in every day to look after her and that's – if you ever wanted a symbol of volunteering that is one."

A total of 68 individuals who have volunteered in Southwark for at least 100 hours in the last year were given the Southwark Stars accolade.

Philip Segall was honoured for his work at Colombo Centre and Sheila Pennant –Jones, Frederick Burtenshaw, James McGeever received the award for their efforts on behalf of Guy's and St Thomas' NHS Foundation Trust.

"Hosting events like this one, for those who have really taken volunteering to heart, is a fitting way to acknowledge and honour those in the borough who are making massive differences to the community through their voluntary work."