Protesters displayed a giant deodorant spray can outside an international sports conference on Tuesday as part of a campaign to force Olympic bosses to ensure sportswear is made by properly paid factory workers. 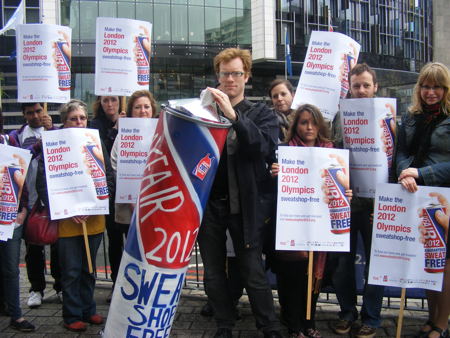 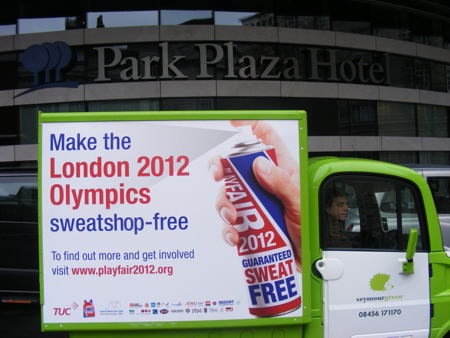 From Sunday 3 to Friday 8 April delegates from organisations such as the Commonwealth Games Federation, the International Olympics Committee and FIFA are meeting to discuss policy.

The convention is also an opportunity for over a hundred smaller federations and businesses to network and see London in the lead up to the Olympics in 2012.

On Tuesday morning campaigners from Playfair 2012, run by a coalition of trade unions, displayed a giant deodorant can outside the hotel as part of their push to ensure that athletics kit worn and sold at the 2012 games is not made in sweatshop conditions.

The SportAccord convention will officially be opened by Mayor of London Boris Johnson at a ceremony at the O2 arena on Tuesday night. Delegates will be taken from the South Bank to North Greenwich by Thames Clippers.

Lord Coe, chairman of London 2012, will also be speaking and updating the convention on the progress of the Olympic programme.

"We believe we have put together an outstanding line up of speakers to help address a range of issues," said chairman Hein Verbruggen.

In 2009 the Mayor of London's decision to award the £920,000 SportAccord contract to the Park Plaza Westminster Bridge came under fire from other London hotels who claimed they had not had a fair opportunity to compete.

The convention is expected to contribute more than £3 million to London's economy.

The SportAccord convention will culminate in an event hosted by the London Eye and the Sea Life London Aquarium at County Hall.