Members of the campaign group 'I'm a Photographer, Not a Terrorist!' and the National Union of Journalists held a lunchtime flashmob outside City Hall on Tuesday to mark World Press Freedom Day. 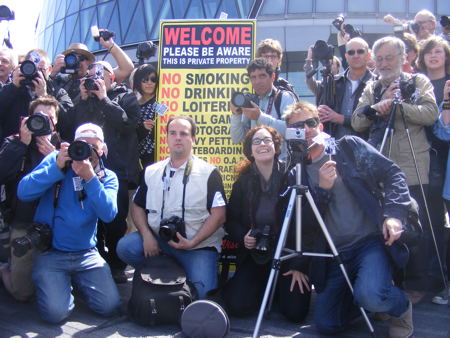 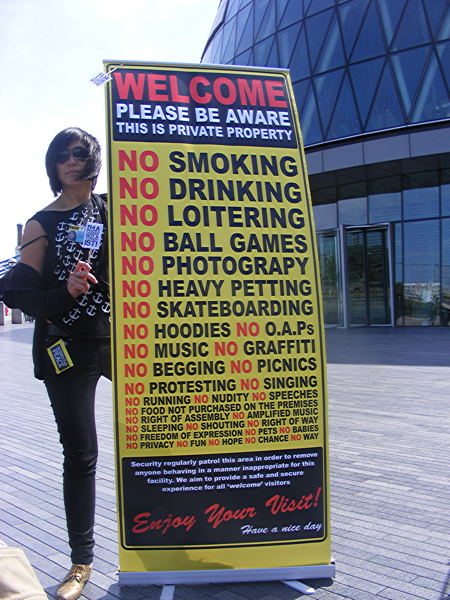 Photographers and camera crews reporting on the work of the Mayor of London and London Assembly at City Hall have long complained of the restrictions on photography around the building which is part of the privately-owned More London Estate.

The blue-jacketed More London security team kept their distance during Tuesday's stunt while photographers took photos of each other on the riverside walk.

Last year the London Assembly's planning and housing committee heard evidence about the problems experienced by members of the press and public when taking photographs on the More London Estate.

One leading London property developer said it was "shocking" that he had been challenged by security guards when taking snaps of the seat of government in his own city.

The PHNAT group delivered a letter to Mayor of London Boris Johnson at City Hall setting out their concerns about "unecessary and draconian" restrictions on photography.

The letter continued: "PHNAT is concerned about the role of private security guards in the prevention of terrorism. Their role has been promoted by police with the result that many privately employed guards are illegally preventing citizens from taking any photographs at all.

"Areas designated as public realm are often privately managed spaces that are subject to rules laid down by the private management companies.

"Most insidious of these is the outright banning of photography in some of our most widely enjoyed public spaces, such as Canary Wharf and the Thames Walk between Tower Bridge and City Hall."

A spokeswoman for the estate's owners said that filming and photography is allowed at More London, but passes (for which a charge is levied) are required for "photography for commercial gain".

The spokeswoman confirmed that news photography is not treated as commercial photography, and protests and demonstrations outside City Hall can be photographed freely.

More London's photography and filming guidelines prohibit journalists from conducting vox pops on the estate "at the request of occupiers".

There is also a ban on photographing people entering and leaving buildings on the estate, but More London says that photography of the Mayor and London Assembly members on the estate is not forbidden.

Photographers covering this Boris Johnson and Joanna Lumley photo opportunity outside City Hall last summer were told by More London staff not to include the estate's office buildings in the background of their shots.