An American philanthropist who has given £1 million to Shakespeare's Globe's fundraising appeal has visited Bankside to see the site of the planned replica indoor Jacobean theatre. 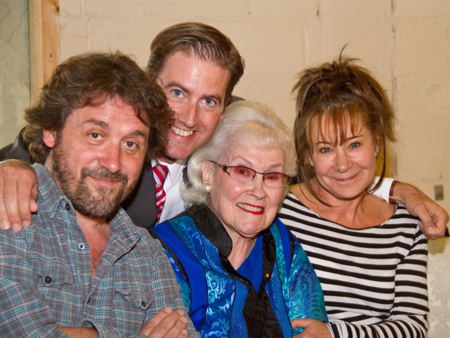 Sara Miller McCune, founder and executive Chairman of SAGE publications, the international academic and professional publishing company, has visited Shakespeare's Globe to see the site which will become the reconstructed indoor Jacobean theatre.

Ms Ms McCune's donation was announced in February soon after the launch of the Ł7 million appeal to raise funds for the fitting out of the new theatre which was built as a shell in 1997.

It was Ms McCune's first meeting with Zoe Wanamaker CBE, honorary president of Shakespeare's Globe and daughter of Sam Wanamaker, who spent over twenty years realizing his vision to build the Globe theatre on Bankside.

"The indoor Jacobean theatre is a vitally important contribution to the Globe project," said Zoe Wanamaker.

"The whole idea of the theatre world in which Shakespeare and his contemporaries worked is incomplete without it."

The indoor Jacobean theatre will seat around 320 people, with two tiers of galleried seating and an authentic pit seating area, which will provide an intimate and intense theatre experience.

Some of Shakespeare's greatest plays – The Tempest, Cymbeline and The Winter's Tale – were written for an entirely different space to the outdoor Elizabethan playhouses.

Ms McCune is an avid theatre lover – Shakespeare in particular – and owns one of the rare fourth folios of Shakespeare's complete plays, often referred to as "the first good folio".

"I am enormously pleased to support the work of Shakespeare's Globe and its education-oriented initiative," said Ms McCune.

"This will enable future generations to experience the incredible acting and production values that keep the Bard's work teaching and entertaining us all. It enriches lives in wonderful ways and opens hearts throughout the world."