Archaeologists have gathered in Bermondsey Square for the launch of a book on the Bermondsey Abbey excavations. 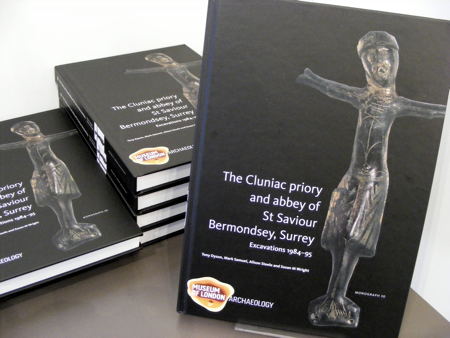 The Abbey stood on the slightly high ground of today's Bermondsey Square with its church lying across the Abbey Street/Tower Bridge Road crossroads.

Speaking in Woolfson & Tay bookshop, Museum of London Archaeology managing director Taryn Nixon said: "We are definately in the cloister with the towers echoing the Tower of London."

Archaeologist Barney Sloane of English Heritage also reflected that with the land devoid of high rise buildings both the White Tower on the north bank and the Abbey to the south would have been the landmarks from the river.

He quoted from Domesday book which described Bermondsey's monastic church as 'new and very beautiful'.

'The Cluniac priory and abbey of St Saviour Bermondsey Surrey: Excavations 1984-95' is published by Museum of London Archaeology with support from English Heritage (£27).

The book also includes more recently recorded evidence in the north of the square.

"This launch is a culmination of many years of very hard work, effort, passion and a lot of enthusiasm," said Taryn Nixon.

This, the museum's 50th monograph, contains a huge amount of detail. There are over 190 illustrations and maps indicating an ancient drain, moat or lane. One map shows the location of fish ponds in Five foot Lane, now Tanner Street, and another where to find the Grange Farm site at a junction in Grange Road.

The number of different Westminster style tiles known have been used for floor decoration is at least 71.

Southwark historian Stephen Humphrey, who is thanked in the book for his help, presented a copy to St Mary Magdalen rector Charles Moore whose church stands on Abbey ground.

Jackie Millar, Bermondsey Square manager, reminded the audience that some remains can be seen inside Del'Aziz.

"Bermondsey Square today is all the richer for the way it celebrates its unique heritage," said Taryn Nixon.