Views of SE1 and as well as work by Southwark artists feature in this year's Royal Academy of Arts Summer Show. 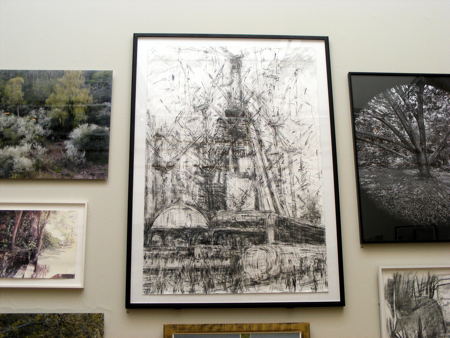 Jeanette Barnes captures a view that won't last for long: the Shard rising above the historic roof of London Bridge Station 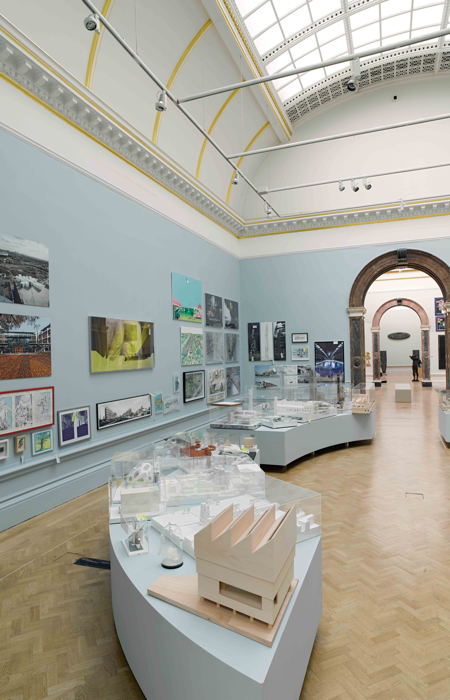 Installation view of Gallery IV, with David Nash's Funnel in the foreground and John Maine's Definition in Five Stages in the background, left. Photo: John Bodkin

Academician Norman Ackroyd is showing etchings of St Kilda and Wharfdale including one called Winter Morning Wharfdale. The prints, in editions of 90, are produced in Professor Ackroyd's Morocco Street Studio where he enjoys watching the early morning light on the Shard.

Jeanette Barnes has entered the first picture of Europe's tallest building in progress with a huge conte crayon drawing of the Shard from London Bridge Station.

Showing the historic 'trainshed' roof which is due to be swept away when the station is rebuilt in a couple of years' time, the picture is a valuable snapshot of London history.

The Shard also makes an appearance in Melissa Scott-Miller's oil called London View. Her viewpoint appears to be an upstairs window at the former Art Academy in Southwark Street as this is a study of the south side of the Menier Chocolate Factory building.

Delightfully, the Precious Blood Church with its bell towers peeps over the railway line to enjoy equal status as the Shard.

Anita Klien, who currently has exhibitions at both the Bankside Gallery and the Menier Gallery, is showing a screenprint with woodblock called Birch.

Room V has a photo etching called Away from Torcello by Stephen Skillman of Metro Central Heights. Also here is a digital print Megalomania by Jonathan Gales from Newington Causeway.

High up in the same gallery is HLS hand-coloured etching, one of two entries, by Danny Rolph who is represented by the Poppy Sebire Gallery in Copperfield Street.

Other galleries with artists represented in the RA show include Advanced Graphics London and Purdy Hicks Gallery.

For the first for some years the architectural section contains no plans for new buildings in SE1. This may be because some which were featured in recent years have still not been built.

• Not The Royal Academy at Llewellyn Alexander Fine Paintings in The Cut is showing hundreds of oils, watercolours and drawings rejected by the official Summer Show.