A proposal to disconnect St Saviour's Dock from the Thames to create an amphitheatre and beach has been shortlisted in the Forgotten Spaces competition. 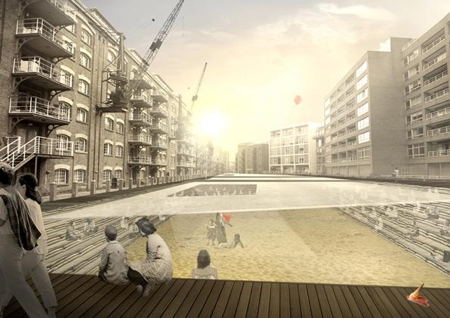 Forgotten Spaces is an open ideas competition run by the Royal Institute of British Architects. Now in its second year, the competition seeks fresh ideas for forgotten areas of the capital.

Schemes submitted to the competition will not necessarily be built; the winners will receive cash prizes and the shortlisted entries will be put on public show later in the year.

"The range of proposals was particularly impressive and it is clear from the great ideas we saw that people had really had a lot of fun with it," says London Eye co-creator Julia Barfield who was one of the judges.

"The shortlist is a great provocation for everyone to think about the use of space in their local area. The challenge now is to try and realise at least one."

The Fagin's Den concept by Geraldine Ng and Liksan Chan includes a canopy above St Saviour's Dock which mimics the surface of the forgotten River Neckinger. The canopy would serve as a shelter by day and cinema by night.

Another local shortlisted entry is Aurelie Pot's proposal to create Brunel's Cafe on one of the piers of Hungerford Bridge.

The Urban Physic Garden – which currently exists as a temporary project in Union Street – was also shortlisted for its longer-term proposal to turn a forgotten yard on the Guy's Hospital Campus into public garden of medicinal plants.

SE1 proposals that failed to make the shortlist included a scheme for an articificial beach at Bankside which would reconfigure itself according to tidal condition, serving as an in-between space to connect the land to the riverside.