An office building on the South Bank has been dismantled by volunteers as the Doon Street site is cleared in preparation for the start of a major redevelopment. 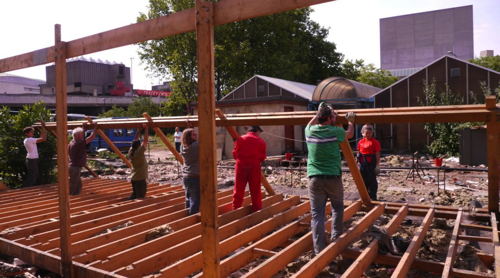 The bolt-together Walter Segal building constructed in 1988 has been moved from its South Bank site on Upper Ground to the Oasis children's adventure playground in Stockwell where it will be re-used to provide valuable indoor space for Oasis activities.

50 hardworking volunteers were involved in dismantling the building over a fortnight, carefully numbering each fixture, fitting, timber joist, window, radiator and panels.

The structure has been transported to Stockwell where the building will be reconstructed to a new design by Cambridge architecture graduates Mat Atkins and Benjamin Barfield Marks. They will adapt it to its new location, to Oasis' specific needs, and to the requirements of a 21st century building.

"Oasis has a strong ethos of sustainability and to get a bit of architectural history at the same time is like winning the lottery!

"The support that we have had from volunteers has been fantastic – with their help we are eventually going to achieve something that we have been working towards for years – a new building which fits our needs."

Since 2001 Oasis has been supported in its quest for a new building by Marks Barfield Architects. They initiated the visit to Oasis by CSCB's group director Iain Tuckett and local MP Kate Hoey which led to the offer of the former Coin Street offices.

"We are thrilled that Oasis is now finally getting a re–newed building" says Julia Barfield of Marks Barfield Architects. "This is a great example of truly sustainable architecture and the adage 'Re-use, Recycle, Reduce'. I am sure that Walter Segal would have been delighted with this continuation of his community self build design philosophy – more than 100 years after his birth."

Moving the office building to Stockwell has cleared the way for the start of building work on the prime South Bank site.

"The 'recycling' of the Walter Segal building is a prelude to the start of our Doon Street development," says Iain Tuckett.

"In July contractors will commence construction of a new headquarters and dance studios for Rambert Dance Company: this requires the removal of our former offices so the move is timely!"