Plans to project the logos of Olympic sponsors EDF and GE onto Tower Bridge during next summer's games have been criticised by English Heritage. 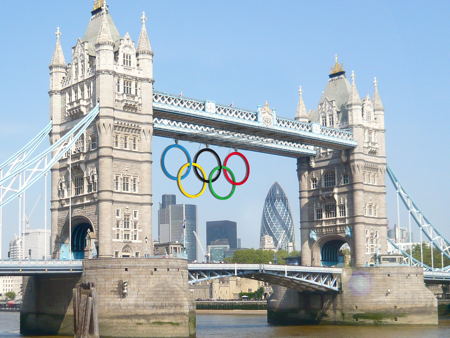 Last month we reported that the City of London Corporation and the Greater London Authority had applied for advertisement consent to hang the Olympic rings and Paralympic agitos from the upper walkways of Tower Bridge during the 2012 games.

Tower Bridge is also to receive a new colour-changing lighting system provided by EDF and GE. The funding for the lighting and the rings is conditional on the two sponsors receiving public recognition. It is proposed that the two companies' logos should be projected onto the bridge's towers for 30 minutes each day during the games as part of a daily early-evening light show.

The proposed lighting and advertisements will require consent from both Southwark Council and Tower Hamlets Council as the bridge straddles the two boroughs.

English Heritage has written to Southwark planning officers to say that it has no objection to the temporary installation of the rings and agitos but objecting strongly to the proposed projection of sponsors' logos.

English Heritage's casework review panel "was adamant that the display of commercial advertisements in any form would cause harm to the special interest of the grade I listed bridge and has no place on a structure of such immense historical and architectural value," wrote historic buildings and areas advisor Malcolm Woods.

"After careful consideration English Heritage does not see a case to justify departing from its normal advice that historic buildings – and especially truly iconic buildings such as this one – should not be used as advertising hoardings.

"Accordingly I must advise you that English Heritage objects strongly to this aspect of the proposals, and unless they are omitted, we urge your council to refuse this application..."

The Port of London Authority is also concerned that the light display could distract or dazzle the crews of boats on the Thames.

Southwark Council's planning committee is expected to consider the proposals in early September.