Vinopolis has applied to Southwark Council for planning permission to establish a market of up to 27 stalls in its new development off Park Street. 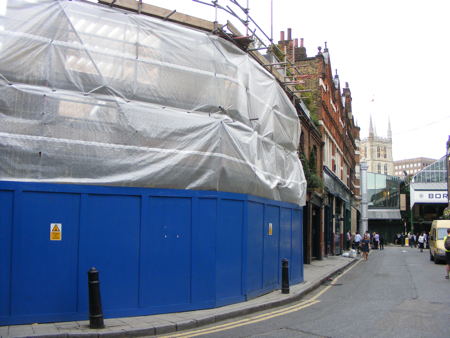 Work on the development, known as Vinopolis Yard, is currently under way.

Vinopolis says that it does not currently intend to build three of the shops it has consent for, and has applied for permission to use part of the yard for a market.

"It is expected that the main goods for sale will be associated with the main offer of Vinopolis and will include wine by the bottle/case, prepared food products associated with the wine-growing regions and other associated items," says a document submitted to Southwark Council on behalf of Wineworld London plc.

"The market will complement rather than compete with the goods for sale in the nearby Borough Market, which are primarily fresh food produce."

Whilst Vinopolis is seeking permission to operate the market seven days a week, it says that Wednesday to Saturday are expected to be the main trading days, mirroring the pattern in adjacent Borough Market.

The prospect of a market space managed by a private company comes at a delicate time for Borough Market, which was established by act of Parliament and is run as a charity.

A spokeswoman for Borough Market confirmed that the trustees are aware of Vinopolis's plans but did not wish to offer further comment at the present time.