A procession of bicycles decorated with flowers made its way along the South Bank on Sunday afternoon as part of the celebrations to mark the 60th anniversary of the Festival of Britain. 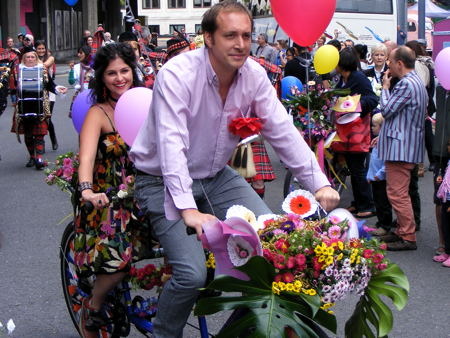 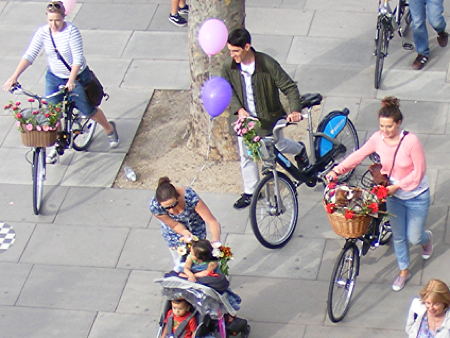 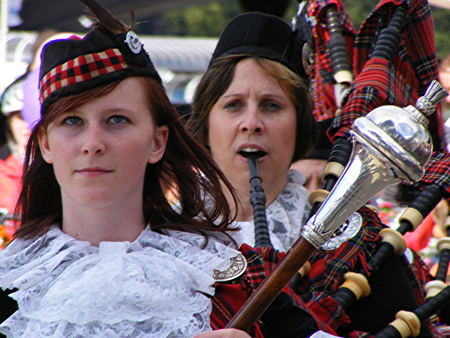 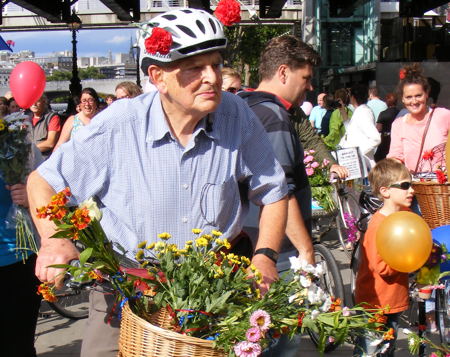 The event was a recreation of the floral bicycle parade that took place in Haringey during the original 1951 festival.

The Dagenham Girl Pipers led the procession from the Royal Festival Hall to the National Theatre and back along the riverside to the upstream side of the Golden Jubilee Bridges.

The Bank Holiday weekend crowds on the South Bank meant that most of the bicycles had to be pushed rather than pedalled.

Sunday's event was part of the Mayor of London's Story of London Festival which this year took the Festival of Britain as its theme.

Next weekend (3/4 September) marks the end of Southbank Centre's summer season marking the 60th anniversary of the Festival of Britain.

At 4pm on Sunday the Big Sing – featuring hundreds of singers stationed across the 21-acre site – will serenade visitors with rousing sea shanties at the Thames-side beach huts, English madrigals at the Queen Elizabeth Hall rooftop garden, Welsh and Scottish folk songs at Ben Kelly's three dry stone walls, and songs inspired by the dispossessed at Gitta Gschwendtner's installation which draws on the original 1951 Lion and Unicorn pavilion.

• Next Sunday the Mayor of London's Skyride – the capital's annual traffic-free cycling event – incorporates Westminster Bridge for the first time. Southwark Bridge will also be closed to motor traffic.