The much-criticised narrow westbound cycle lane on Lambeth Bridge will be widened when the carriageway is resurfaced over the next two weeks. 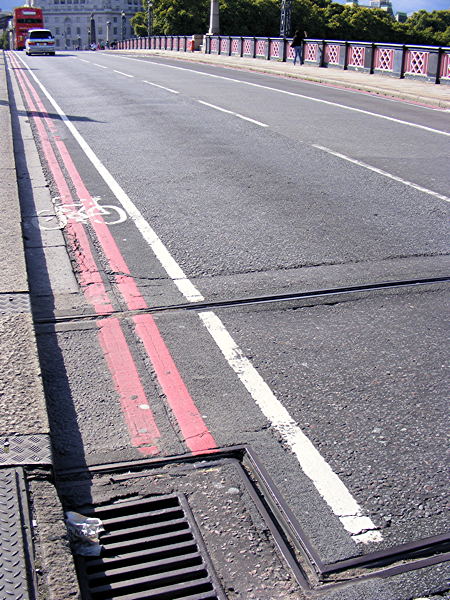 Transport for London says that – weather permitting – it will be carrying out night-time maintenance works on Lambeth Bridge from Tuesday 30 August to Thursday 8 September.

This work will take place overnight between 9pm and 5.30am, when traffic levels are lower, and has been scheduled to avoid any major lane restrictions or closures on nearby river crossings.

TfL says that it has taken the opportunity to review and improve conditions for cyclists on the bridge. The narrow cycle lanes are barely wider than the gutter.

Department for Transport guidelines recommend that cycle lanes should be at least two metres wide.

"This essential work to refurbish and resurface Lambeth Bridge is vital to ensure that this important river crossing can remain open to all pedestrians, cyclists and road users," says TfL's director of roads Dana Skelley.

"By carrying out the work overnight, we can ensure disruption for road users and local residents is kept to a minimum."

In 2009 the ibikelondon blog asked whether Lambeth Bridge had the "worst cycle lane in London". Next Saturday a new campaign group – the Cycling Embassy of Great Britain – is planning a photo opportunity at the bridge but it may find that the markings have been removed by then.

"Feedback from our members indicates that many actively avoid this bridge following crashes or near misses.

"We hope that the new arrangements will make Lambeth Bridge safer for all cyclists and encourage greater use of this bridge, a key gateway to Lambeth."