The Tate to Tate boat service between Bankside Pier and Millbank Pier will be extended to serve St George Wharf at Vauxhall from 3 October, Thames Clippers has announced. 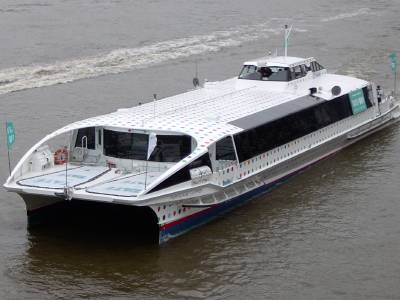 The Tate to Tate boat service – linking Tate Modern with Tate Britain – was
launched in 2003.

From 3 October, the service will be extended upstream from Millbank to serve the new pier at St George Wharf close to Vauxhall Cross.

During Monday to Friday rush hours the eastern terminus of the shuttle will be Blackfriars Pier but during the day on weekdays and all day at weekends the service will run to Bankside Pier.

The Tate to Tate boat runs every 40 minutes throughout the day. The end-to-end journey time from Bankside to St George Wharf is 16 minutes. Travelcard holders receive a one-third discount on fares and Oyster pay-as-you-go users pay 10 per cent less than the cash fare.

The new Thames Clippers timetable also includes the reinstatement of some peak-hour non-stop sailings between London Bridge City Pier and Canary Wharf with a journey time of just 9 minutes.

This express shuttle was launched in April 2009 to coincide with a publicity drive for Thames boat services by the Mayor of London but later withdrawn as part of a raft of cuts.