Environmental activists from the Climate Rush group staged a protest on Blackfriars Bridge on Thursday morning ending up outside Transport for London's offices at Palestra in Blackfriars Road. 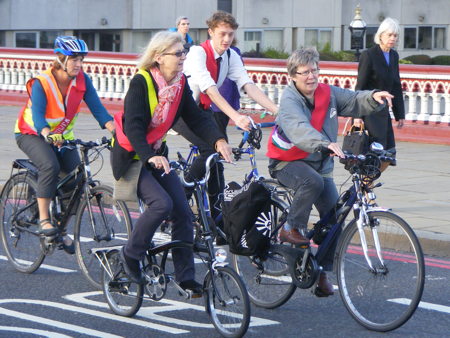 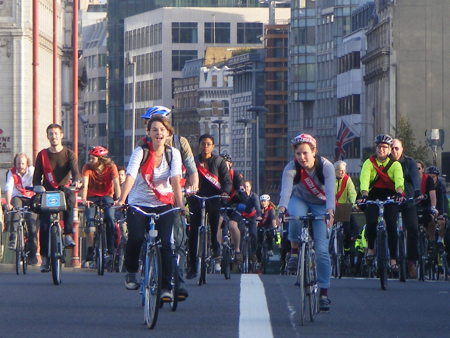 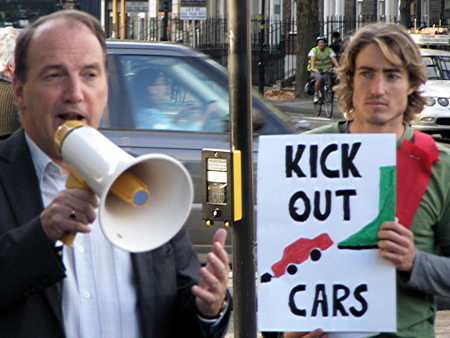 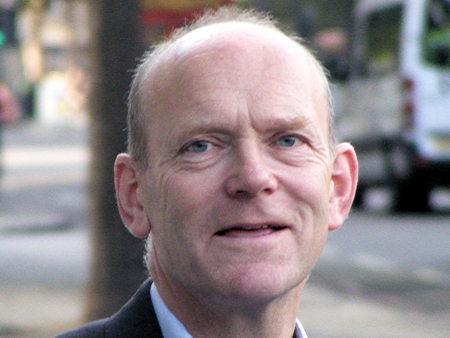 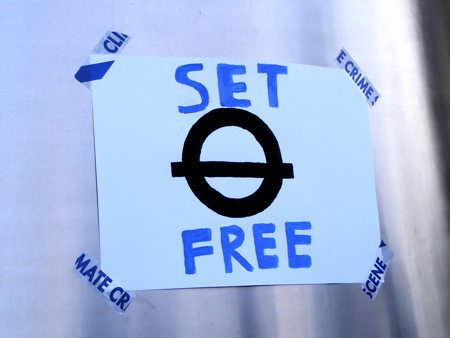 The protest, held on World Carfree Day, was the latest in a string of events designed to highlight many cyclists' unhappiness with Transport for London's plans to remodel the junction at the northern end of Blackfriars Bridge and raise the speed limit from 20 mph to 30 mph when works are complete.

Climate Rush is calling for a 20 mph speed limit throughout central London, car-light and car-free areas and for TfL to make its processes more transparent and accountable.

"Buses would glide through town, people would feel safe cycling and our air would be clean. Children could walk to school. Instead, we have inefficiency. We have time being wasted and lives being lost. Rather than perpetuate this, TfL need to start prioritising people."

Speaking about Blackfriars Bridge, Darren Johnson said: "The Mayor has ignored all the lessons which came out of the death of the cyclist Vicki McCreery such as the TfL report recommending that London's bridges should be 20 mph.

"The Mayor didn't even see the report before signing off the TfL plans and it is clear that the Mayor is happy to allow a 'car is king' mentality to dominate road design in London. If London is to reduce air pollution and stop the recent rise in pedestrian casualties, then we need to design roads for the future, not the past.

"All the evidence at Blackfriars Bridge is that cyclists and pedestrians will become the main users of this space and that is who it should be designed for."

In his speech Simon Hughes highlighted the problems caused by pollution and the need to promote the environmental and health benefits of walking and cycling.

"I see Boris as a petrol-head who likes cycling," said John Biggs. "He takes the view that because he's rough and tough, everyone else should be able to fight their way on our roads and it doesn't need us to stand up for vulnerable users. That's where I think he's fundamentally wrong. We need to challenge him and get him to change his habits and lifestyle in the interests of all of us in London."

Transport for London bosses were quick to come to the Mayor's defence.

"The Mayor is a passionate cyclist and his cycling revolution is a key priority," says Leon Daniels, managing director of surface transport at TfL.

"TfL has invested millions in improving London's streets for all road users, especially cyclists over the last decade and will continue to do so. We are only directly responsible for five per cent of the Capital's road network (the red routes), which are primarily the main arterial roads into and out of London, so the vast majority of roads and cycle lanes in London are maintained by the boroughs, who we are working with to improve provision for cyclists through TfL local implementation funding and the Mayor's Biking Boroughs scheme."