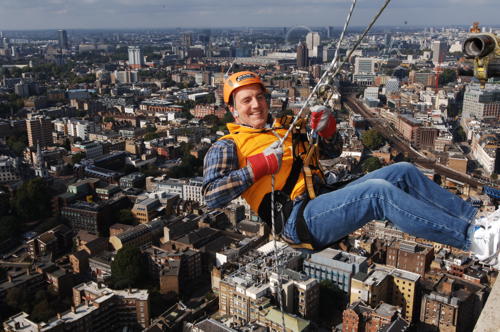 The Bermondsey & Old Southwark MP hopes his descent will raise at least Ł2,500 for the charity which funds research into myeloproliferative disorders (MPDs) and supports patients via education and advocacy.

"It's probably not true to say that when a friend asked me to abseil for MPD Voice I leapt at the chance," says Simon Hughes MP.

"But as I have abseiled down Guy's Hospital Tower once before for charity – and survived – I thought it would help a good cause and be a good reminder to try to improve my fitness after the summer.

"MPD Voice clearly does a very important job. The medical disorders which come under the MPD umbrella are serious conditions which need recognition, treatment and research, and where the people affected need support from family and friends.

"I did this abseil as a way of showing my support for all those affected, both as the member of Parliament for Guy's Hospital and a supporter of MPD Voice."

MPDs are rare cancers which affect the bone marrow, destabilising the body's mechanism for controlling blood cells levels. These disorders can cause a life-threatening increase or decrease in blood cell numbers.

Experts don't know what causes MPDs, but researchers in the field hope to understand more about the mechanisms behind these diseases so that they can offer people with MPDs better treatments or even a cure.

MPD Voice was founded in 2003 by people with MPDs and by medical professionals, at a time when there was virtually no reliable information available to patients on the internet.

The organisation now offers a website for patients and many other types of support in addition to funding research.

MPD Voice is part of Guy's and St Thomas' Charity.

If you want to donate to MPD Voice in support of the MP's abseil, visit: http://uk.virginmoneygiving.com/simon.hughes6