Trade union activists held a rally outside London South Bank University on Friday lunchtime to draw attention to the low pay received by cleaners at the university. 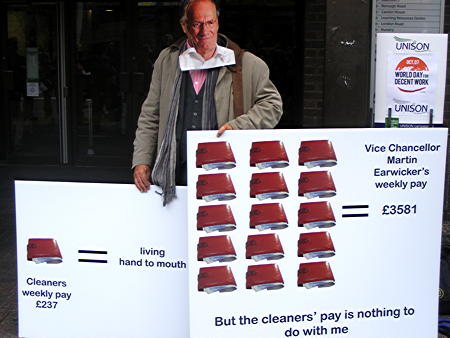 A UNISON activist wearing a mask of Professor Martin Earwicker 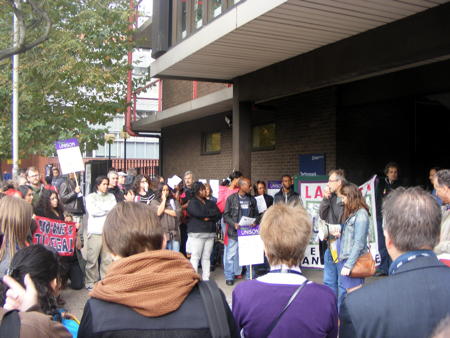 UNISON says that more than a hundred cleaners at the university are paid £6.08 an hour – well below the the current London Living Wage of £8.30 an hour.

The London Living Wage is set by the Mayor of London and represents a widely supported minimum hourly rate for workers to be able to live above the poverty line in the capital.

LSBU cleaners are employed by Interserve. Union activists claim that Interserve staff were threatened with disciplinary action if they spoke out about their employment conditions.

A UNISON activist wearing a mask representing LSBU vice chancellor Professor Martin Earwicker held up placards highlighting the difference between the pay received by the university's most senior employee and the cleaners who look after its buildings.

"It is a scandal that cleaners at LSBU are made to suffer while the top ten members of staff at the university together earn £1 million a year – the vice chancellor receives £186,000 alone," says Harry Lister, regional officer for UNISON.

"The cost of living in London is growing, with rising inflation. The cleaners at LSBU work hard to keep the university clean and to provide a pleasant environment for the students and deserve fair pay for a hard day's work.

"World Day for Decent Work is a global occasion for trade unionists to mobilise and show solidarity with poorly paid workers. It is a day when trade unions all over the world stand up for decent work and conditions.

"We are calling for all workers to be be paid a living wage, to help pull people out of poverty."

In July the Liberal Democrat London Assembly member Mike Tuffrey asked the Mayor of London whether he supported the campaign by LSBU staff and students to ensure that staff employed by sub-contractors were paid the London Living Wage.

"I certainly encourage employers across the capital to pay the LLW to their directly-employed staff and to ensure that their contractors do the same," said Boris Johnson.

London South Bank University continues to insist that it is not responsible for the pay received by third-party employees who work on its campus.

"The persons concerned are employed by an external contractor, and not by the university," said an LSBU spokeswoman.

"There is no dispute with LSBU. The university has not prevented this demonstration taking place today and has had no contact with the employees of the external contractor.

"Where external contractors are used to provide a service to the university, LSBU would request that all enquiries on these matters are directed to the company concerned."

Interserve took over the LSBU cleaning contract in August.

Interserve refused to comment on the demonstration but the London SE1 website understands the company is reviewing the pay received by the staff it inherited from the previous cleaning contractor.