Jon Snow joined his ITN colleague Jude Cowan at Woolfson & Tay on Monday evening to talk about her exhibition and poetry book inspired by her work as a television archivist. 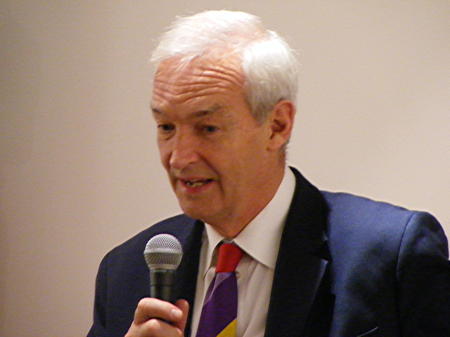 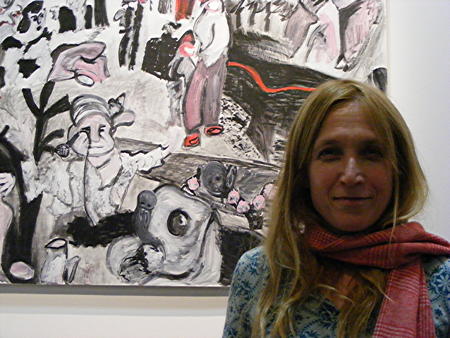 The Channel 4 News anchor cycled through the rain from the ITN studios in Holborn to the bookshop in Bermondsey Square arriving just forty minutes after he had signed off on screen.

Historian Jude Cowan is an archivist for Reuters Televison News working shifts in the basement of the ITN building and a floor below Channel 4 News. Her job is to edit film coming in from all over the world.

The film rushes, she says, often show disturbing scenes which can never be broadcast.

"You see a lot of executions," she reflected. "It's easy to become desensitised and like an old newspaper hack."

Her own response has been to wrote poetry now brought together in her book For The Messengers. She also uses painting and sound featured in her exhibition this month at the bookshop.

"I found this collection extraordinary," said Jon Snow speaking of the poems. "It's got such a breadth. I can't understand why she isn't bonkers. I think she is an extraordinary breath of humanity.

'She has found a way with connecting with it without destroying her own life. We shall hear much more of Jude in the future."

Jon Snow said that his newsroom had a "huge debate" about how much should be shown when reporting Colonel Gaddafi's death.

During the evening Jude not only spoke about her work and read some of her poems but also showed an example of unedited five minute film she had received.

It depicted a shocking death and injuries, never seen on British television, but the incident moved her to write a poem. The camerman, whose work was known to Jude, had died during filming.

For her bookshop audience, Jude highlighted her other artform by performing, with music and song, a brief improvised story based on unsettling news.

The book cover carries a quote from ITV News's international editor Bill Neely who writes: "Unlike the daily news that fades from view, Jude Cowan's images linger in the memory. She creates poetry which finds the humanity amid the horror of our times. Her work is outstanding."

Copies of For The Messengers (Donut Press; Ł10) are available from Woolfson & Tay during the exhibition.