Southwark Council leader Peter John has revealed that he has asked for the cut-down versions of the Union Flag and St George's Flag currently flown from flagpoles above the authority's Tooley Street offices to be replaced with full-size versions. 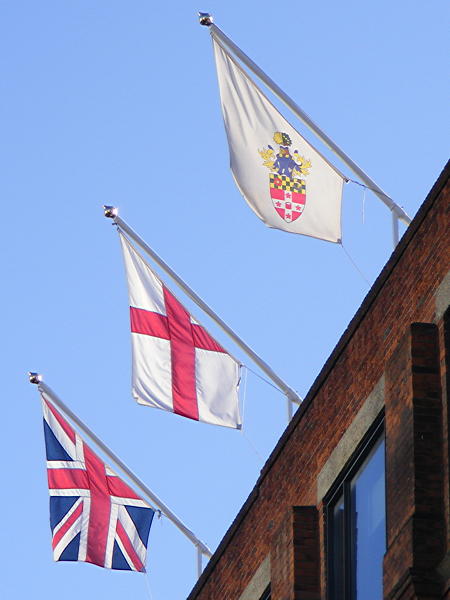 The flagpoles were installed earlier this year to allow the council to continue to fly the flags previously displayed on the roof of the former Southwark Town Hall in Camberwell.

The new flagpoles are cantilevered over Tooley Street at a 45-degree angle and, in a break with protocol, the flags have been specially shaped so that the bottom edge is horizontal.

A complaint about the cut-down flags was raised this week on the London SE1 forum, prompting a response from the council leader who confirmed that he has asked for the flags to be replaced.

"The shape of these flags has really annoyed me and I have asked for proper shaped flags to replace them as soon as possible," said Cllr John.

"Apologies to anyone affronted by them – I am working on it urgently."

160 Tooley Street is now the borough's main civic and administrative centre. The building already hosts all the council's main committee meetings and work is due to be carried out to enable the foyer to be used for meetings of council assembly.

In the New Year the council is also expected to announce plans for a new 'customer contact point' in the Tooley Street building.