Slick Shooter, a game based on tiddlywinks devised by pupils at the Walworth Academy, will go on sale at the Design Museum shop this sumer. 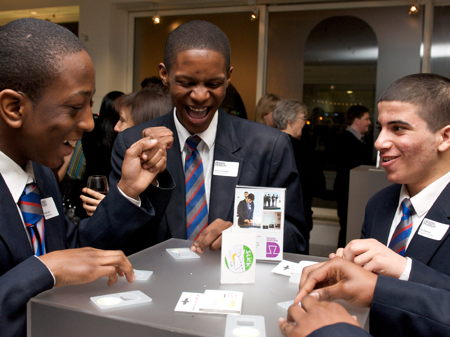 The Walworth Academy pupils were this week named as winners of Design Ventura, a design award that develops student creativity and enterprise skills, at a celebration event hosted by Sebastian Conran at the Design Museum in Shad Thames.

'Slick Shooter' takes its inspiration from the traditional tiddlywinks, creating a cleverly designed, marketable and portable product which can be assembled from a piece of plastic the size of a credit card. The pupils' aim was to design a game that encourages young teenagers to play as a group.

The winning team receives a Ł1,000 bursary and a five-day programme of workshops and guidance from professional designers to develop the game, which will be sold exclusively in the Design Museum shop this summer.

Design Ventura is a three-year education initiative for 14-16 year olds. It was launched by the Design Museum in May 2010 and is sponsored by Deutsche Bank.

"Put an imaginative creative youngster in a seemingly empty room and soon they will come out with something they have made," said Sebastian Conran.

"On the face of it the 'Slick Shooter' may look like a tiddlywinks hybrid, but it is really the sophistication of the game-play, rules and playground league where the design thinking is most evident."

Another SE1 school also made the shortlist for Design Ventura: pupils at Globe Academy devised the Curva Light, a self-assembly user-configurable chandelier.