New images showing how the northern roundabout at Elephant & Castle could be transformed have been released by Transport for London. 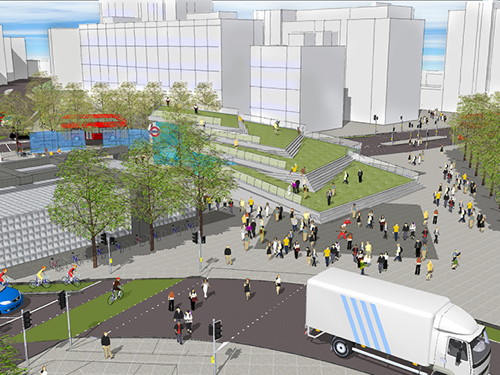 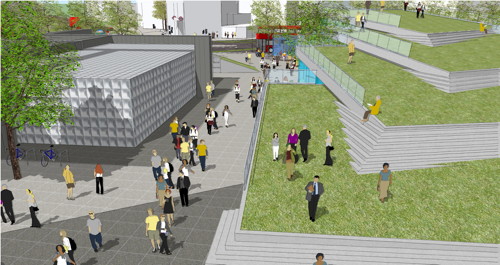 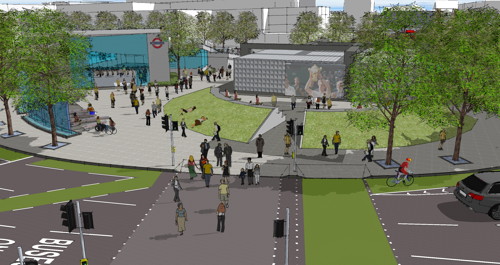 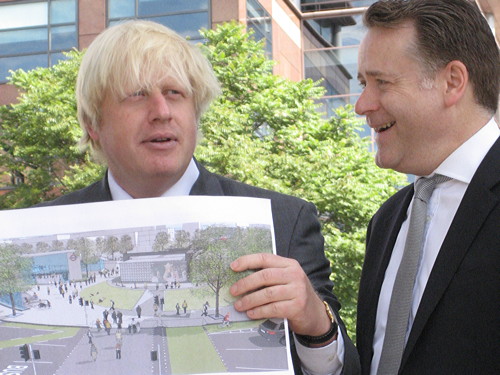 Boris Johnson and Cllr Peter John check out the plans

The concept images were published on Wednesday to coincide with the launch of the report of the independent Roads Task Force commissioned by the Mayor of London to come up with a new vision for the capital's highway network.

The pictures show a new pedestrianised area linking the Michael Faraday Memorial with the shopping centre and a new entrance to the Northern line tube station created at the centre of the junction.

Cllr Peter John said: "We see the launch at Elephant & Castle today as a strong indication that Southwark is in an excellent position in terms of its aspiration to vastly transform the transport network as part of the bold vision we have for the area.

"Elephant & Castle is the gateway to central London and the south of the city, it is a hugely important site that desperately needs a transport network to match its importance and its location."

Cllr Fiona Colley, cabinet member for regeneration, added: "We have long asked for everyone to get on board with our plans and complete our ambition to see Elephant & Castle redesigned for future generations of all those who live, work and travel through the area.

"We want a safer, more accessible and befitting transport design for Elephant as it continues to change and improve. We see today's launch as a vindication of our plans."

Mr Johnson said: "I welcome the Roads Task Force report and the bold approach it proposes for London's 21st century roads and streets.

"It is in tune with my 2020 Vision, our plans on cycling and for investment in London's roads and streets.

"For this great city to retain its global pre-eminence, it is essential we continue to invest and have the courage and vision to develop and drive forward innovative solutions.

"This is a fantastic contribution and I look forward to working with partners, including those represented on the Roads Task Force, in taking many of these ideas forward."

What the Roads Task Force says about Elephant


Elephant & Castle northern roundabout is a key public transport interchange and major bus network hub on London's Inner Ring Road. It is also densely populated with shops and other attractions to residents.

The roundabout has the worst collision record for all comparable junctions in London, experiences significant levels of bus congestion, and has poor facilities for pedestrians and cyclists. There is also an above-average crime rate in the vicinity.

The anticipated intensification of development at Elephant & Castle will further increase pressure on the area. Previously, proposed measures have concentrated on improving road safety and reducing severance but have done little to improve the sense of place. A recent peninsularisation concept could have transformative impacts on public space, road safety, and facilities for pedestrians and cyclists. Refined designs will Balance these improvements with the movement needs of buses and other motorised traffic.

To effectively reduce conflict in this area, a reduction in motorised traffic is needed. The future role of the Inner Ring Road also needs to be agreed to determine whether alternative orbital capacity may be required.

In its response to the Roads Task Force, Transport for London also promises a major revamp of Tooley Street to coincide with the planned completion of the new London Bridge Station in 2018.