Flower arrangements for leading boats in the Thames Diamond Jubilee Pageant have been created in Waterloo. 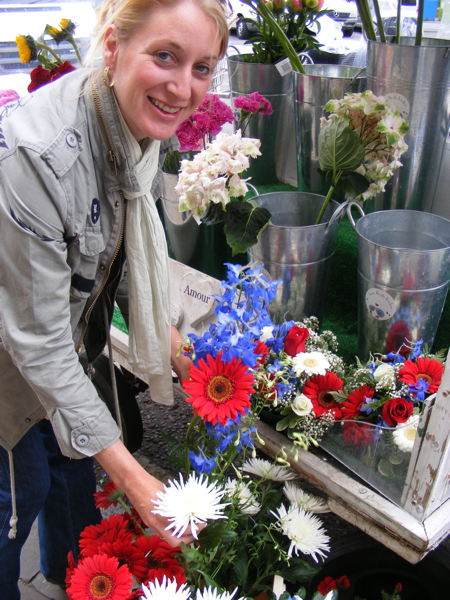 Kelly Newton, who runs a flower stall outside La Barca restaurant in Lower Marsh market, was working on Friday and Saturday with red, white and blue flowers between serving her regular customers.

Whilst horticulturalist and TV presenter Rachel de Thame was preparing 9,600 cut flowers for the royal barge, Kelly was concerning herself with table, buffet and bar floral decorations on eleven other lead vessels including Golden Salamander and The High Society.

Kelly, now in her second year in the market, claims to understand the demands of preparing decorations for cabin tables since she comes from a family of leading watermen and lightermen. Her brother is a Queen's Swan-Upper involved the annual upstream swan count.

At the start of the Jubilee weekend Kelly was planning to mainly use red Freedom roses, white Akito roses and blue Delphiniums along with Gerberas and Gypsophila.

All work had to be completed by Saturday night.

On Sunday she will be up early for a final check just before the decorations are distributed.

At 12.30pm on Sunday Kelly will board the King Edward at Embankment Pier before she sails upstream to take part in the procession.

"I'm really excited about going," said Kelly as she lent over her flowers in Lower Marsh.

Friends from the street are planning to be on the South Bank from 9am to get a good view of both the Queen and Kelly.