Lower Marsh Market will get a new lease of life next month when Westminster Artisans starts to operate the market on a one-year licence. 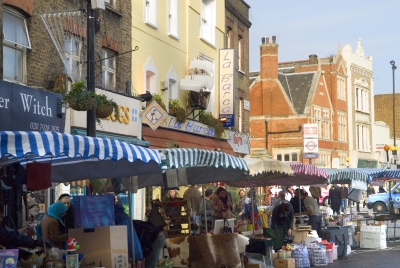 For years Waterloo residents and workers have lamented the decline of the historic street market and initiatives to revive it have had limited success.

Now Lambeth Council and Waterloo Quarter BID have enlisted the help of Westminster Artisans – the social enterprise which has turned around Pimlico's Tachbrook Street market – to bring new traders to Lower Marsh.

Westminster Artisans will initially focus on Wednesdays, Thursdays and Fridays. In response to demand from Waterloo residents who work outside the area and would like to support local shops, there will also be experimental Thursday evening markets and occasional Saturday events.

The first new traders will set out their wares on 1 September and this new phase in the market's life will be marked by a special event in early October.

Work is due to start soon on a scheme to resurface the street and reorganise the market with fewer pitches and better facilities for traders.

• Lower Marsh was one of the filming locations for the the new movie One Day – starring Anne Hathaway and Jim Sturgess – which receives its UK premiere this week. Producers contributed Ł1,000 to a fund for improvements to the street.