Work to construct the largest solar panel array in London reached half way on Thursday as the 2,200th solar panel was installed on the roof of Blackfriars Station. 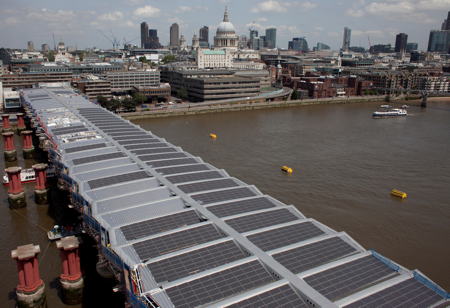 As workers put the finishing touches to the new cross-river station with entrances on the northern and southern banks, 4,400 solar panels – which will generate up to half of the station's energy needs – are being installed on the roof. The first panel was installed last October and half the panels are now in place.

The solar array, made by Panasonic and designed and installed by Waterloo-based Solarcentury, covers an area of 6,000 m2, making Blackfriars the largest solar bridge in the world.

"Blackfriars' iconic location spanning the River Thames makes it a showcase for the potential of solar power, and an important benchmark for Network Rail as we look to make best use of sustainable technology on the rail network," says Paul Byrne, Network Rail senior programme manager for Blackfriars.

"Blackfriars will become fully operational for passengers this month, with two new entrances, four new platforms and a new London Underground station in use. We'll complete work on the bridge, including the installation of solar panels, later in the year."

"Architecturally challenging, the project demonstrates just what is possible with this versatile technology in dense urban areas. We've been working amongst one of the most complex build programmes in the country, at height, over water and live train lines. It's a great feeling to be half way there."