Southwark councillors have voted for a second time to reject an application by The Money Shop to open a payday loan service in Tower Bridge Road. 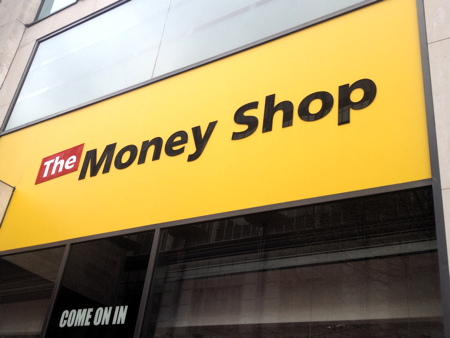 The Money Shop - not coming to Tower Bridge Road - for now

In a finely balanced decision on Tuesday night, planning sub-committee B resolved by three votes to two to refuse planning permission for the change of use of the shop at 82 Tower Bridge Road on the grounds that it "would not amount to a sustainable form of development and would be to the detriment of creating a thriving retail area which would better serve the needs of the local population".

The planning application was initially rejected by Bermondsey Community Council in April but due to new information submitted by the applicant the matter was referred back to one of the new planning sub-committees which have inherited the planning functions of community councils.

The original decision of the community council had relied on the Government's new National Planning Policy Framework and its suggestion that planning authorities should consider the social and environmental consequences of development as well as economic sustainability.

However, The Money Shop has pointed to three recent appeals – in Skegness, Eastbourne and Wisbech – where councils' decisions to reject applications from the chain have been been overturned by planning inspectors.

The council's planning department recommended that members should approve the planning application.

The meeting heard from local residents Kevin Dolan and Charlie Samuda who spoke as objectors to the proposed shop.

"The National Planning Policy Framework has at its core an issue of economic sustainability and economic growth. I think passing this proposal would go against that quite fundamentally," said Mr Dolan.

He explained that companies like The Money Shop encourage people to get into debt and to spend money servicing that debt rather than contributing to the local economy.

Turning to the planning inspectors' decisions cited by the Money Shop, he said: "Tower Bridge Road is not Skegness or Eastbourne. It's a very different set of circumstances ... and I don't think [those decisions] should be taken into account."

Planning agent Jenny Barker, representing The Money Shop, said: "I am aware of a number of objections to the proposal due to the nature of the financial services that will be on offer and whilst ... these are not planning issues, I can advise that The Money Shop – unlike some operators in this field – subscribes to a strict voluntary code of practice ... which means that The Money Shop is socially responsible.

"Importantly we believe that there are significant economic benefits associated with this change of use. The proposal will result in the reuse of a long-standing vacant property which has been vacant for in excess of 16 months during which time it has been marketed without success.

"The Money Shop will also make a substantial investment in the property in the form of a refurbishment to the value of Ł150,000, commitment to a 10-year lease and the creation of eight new full and part-time jobs."

"This application is not in favour of sustainable economic development," said Cllr Hickson.

She added: "One of my key concerns is not just the height of the interest rate but how often they make people come back. People get stuck in a cycle of having to get one more loan to pay off the last loan, and they get addicted to this kind of credit. That in itself I don't see as positive thing for sustainable economic development."

She continued: "We have recently approved money to support improvements on Tower Bridge Road and this [planning application] would run counter to what the local community wants to see on that road.

"It would send a signal that this high street is in decline rather than on the up."

Cllr Gettleson was more forthright in his condemnation of the payday loan industry.

"I don't see this as materially different to people using a loan shark," he said. "This is a loan shark with better marketing."

Under questioning from committee members, he added: "This is one of the worst possible things that could go in that location."

He continued: "This is still an area of profound deprivation and these companies deliberately target the most deprived and the most desperate to ratchet up their credit interest rates."

Arguing for the protection of retail premises, he said: "Tower Bridge Road is a place of huge interest where people can still afford, no matter who they are, to go down to a shop and buy something.

"When you compare it to certain surrounding streets – and I'm thinking of Bermondsey Street to the north – that isn't necessarily true because A1 class use has been driven out."

Planning and legal officers warned committee members that if they refused the application and the decision was overturned on appeal, the council could face an order for costs.

Cllr Neil Coyle argued that Southwark, as one of the authorities with the highest volumes of planning applications, and a large planning department, is well placed to force a test case on the Government's new National Planning Policy Framework.

"If we aren't in a position where we have some minds who can test these policies, then I don't know who will," he said.

Commenting on the prospect of an appeal, Gary Rice, the council's head of development management, replied: "We do have some of the best minds and talents around, but I'm not sure we would win this one."