Secretary of state for health Jeremy Hunt MP paid a visit to the cancer day unit at Guy's Hospital on Tuesday and he spent time chatting to patients and staff to find out more about their treatment and the services on offer. 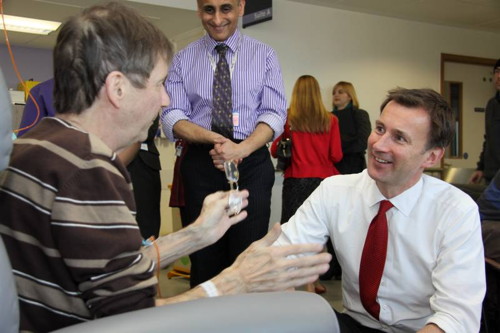 The minister was welcomed by Dr Maj Kazmi, clinical director for cancer services, and shown around the unit by sister Minie Salvador, matron Precie Mahinay and head of nursing Mairead Griffin.

He also met representatives from the cancer services user group, Anna Torode and Karen Sorensen, who explained some of the practical ideas that patients have been able to feed into both the physical design of the unit, as well as the way that care is organised to meet the patients' needs.

For example, wherever possible, patients are cared for in bays with other patients being treated for the same type of tumour as they find this supportive and helpful.

Mr Hunt was also able to see the plans for the new cancer treatment centre at Guy's – recently approved by Southwark councillors – before having a discussion with a range of clinical staff including Ruth Wallis, director of public health for Lambeth and Southwark.

Minie Salvador said: "It was a pleasure to show the secretary of state the unit and the work that we do. I think he really appreciated the opportunity to chat to patients about their experiences."