Southwark Cathedral is to host a second charity sleepout this winter after the inaugural event last year raised £60,000 for a south London night shelter project. 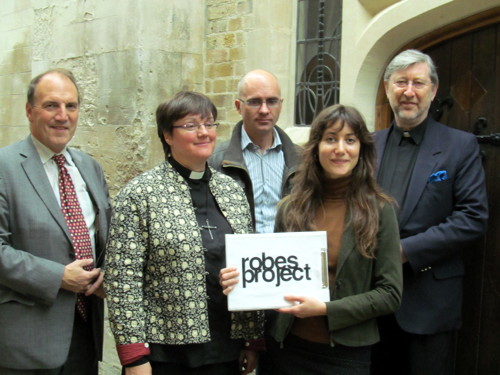 Simon Hughes MP joined sub-dean Bruce Saunders to make the announcement that the cathedral was committed to backing the Robes Project which provides winter shelter for homeless people.

They were supported by once homeless Christoffer Groblica who has benefitted from the charity and is now in accommodation and education.

"I saw a best friend die on the streets and, if we save one homeless person, the Robes Project will be worth it," Chris said. "It is the best way to start a new beginning. I was able to sleep, have a shower, get some food and some sleep, which gave my brain a chance to rest. Everyday I had the power to start again and find a way out.

"You can lose everything in life easily, but it is very difficult to rebuild it. The Robes Project is essential to help with this and I now want to help others get off the streets."

Comedian Jo Brand has already agreed to join in and entertain other participants.

Robes patron Simon Hughes, who is also planning to spend the night outside the cathedral, said: "The project provides short-term aid for South London's rough sleepers during the winter months and, crucially, helps our guests to find long-term accommodation, training and employment.

"Last year's sleepout at Southwark Cathedral raised over Ł60,000 which will help Robes look after people through this winter and well into next year. This is truly a small charity doing a big job for those who are in need."

He added that numbers being received by the nearby Manna Centre are going up not down.

Canon Saunders said that Crisis had just marked its 40th anniversary and did not know whether to celebrate or lament the fact that it is still needed. Homelessness figures in London had been falling but are now going back up again and this is a cause for very great concern.

"By treating homeless people like human beings, projects like Robes give people not just food and shelter but friendship, practical advice about housing and jobs and a reason for going on living."

The charity offers a hot dinner, somewhere to sleep, shower facilities and a cooked breakfast for around twenty guests every night between November and April. It is the only project of its kind between London Bridge and Croydon and around 80 homeless guests are expected stay at the shelter this winter.

In 2011-12 the project ran for 148 nights and stopped 48 guests from sleeping rough before finding them stable accommodation and employment options.

Donations to the project can be made via www.justgiving.com/Robes