Representatives of the local Latin American community and Southwark Council gathered at the Elephant & Castle Shopping Centre last week to celebrate the authority's decision to recognise Latin Americans as a distinct ethnic minority. 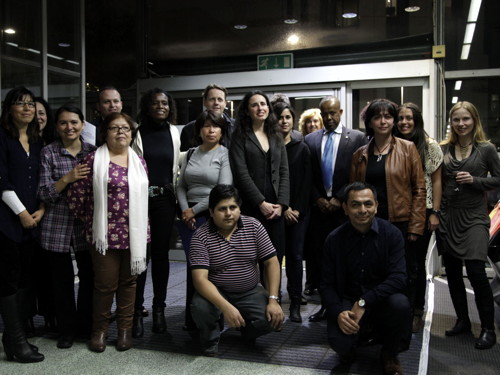 Last month we reported that the council had responded to the long-running campaign to ask that Latin American be recognised on official forms and document as a distinct ethnic group rather than being considered 'other'.

At last week's celebratory event, guests were treated to an array of Latin American entertainment before being addressed by Cllr Claire Hickson, cabinet member for communities and economic development, and representatives from the Latin American Recognition Campaign.

Gladys Medina from the LARC said: "We are very happy with the council's move to officially recognise the Latin American community particularly as Southwark is home to the largest concentration of Latin Americans in London and in the UK.

"We hope this urges councils could adopt a similar decision in order for our needs and wants to be met more adequately."

Cllr Hickson added: "We are glad to be the first council to acknowledge the Latin American community in this way. It is fantastic that this decision has given the community something to come together and celebrate. Going forward, we look forward to a working closely with the community and to being able to provide services that are accessible to them all."

However, the LARC has submitted an objection to Lend Lease's outline planning application for the redevelopment of the Heygate Estate, citing fears that the Elephant's 70 Latin American businesses could be priced out of the area if the regeneration process pushes rents up.