Southwark Council has confirmed that it has made an offer to buy the borough's de-facto town hall at 160 Tooley Street. 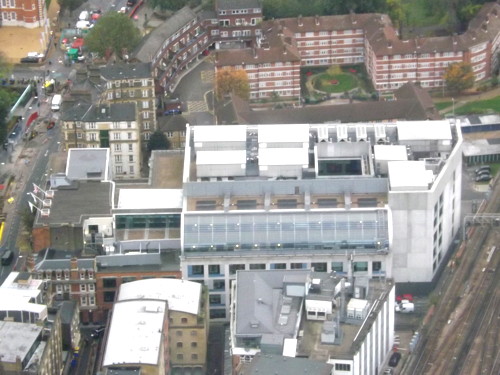 160 Tooley Street seen from the top of the Shard

The council currently rents its headquarters building from clients of HSBC Private Bank who bought the building for Ł132 million in 2008.

Last month the building was placed on the market for Ł150 million, and now the council's cabinet member for resources, Cllr Richard Livingstone, has confirmed that the authority is bidding to acquire the freehold.

Speaking at the council's overview and scrutiny committee on Monday night, Cllr Livingstone said: "We have now made an offer which must remain confidential at this time.

"We are, however, confident that the offer is likely to be accepted and officers are currently reviewing draft heads of terms."

An urgent report is to be considered by Southwark's cabinet at its meeting next week and the sale of the building could be completed before Christmas.

Council bosses believe that repayments on a loan to buy the freehold would be cheaper than renting the building, as well as providing the borough with a significant asset.

When in opposition, Southwark Labour vociferously opposed the decision to centralise council departments at the Tooley Street building. At that stage it was expected that the town hall in Camberwell would continue to be used for council and committee meetings.

Last year the council granted a long lease on the town hall in Peckham Road and the Tooley Street premises became the borough's civic as well as administrative centre.

Simon Hughes MP has previously criticised the building as "soulless" and unsuitable for formal civic occasions.

Around 2,000 council and NHS staff work in the building.