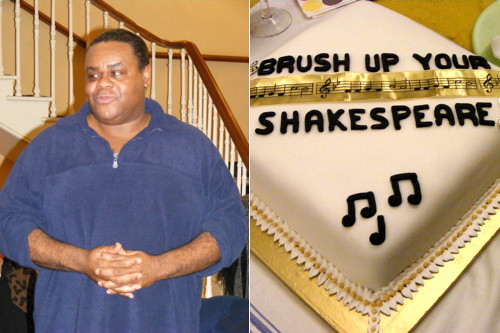 The actor, probably best known for his role as Norman 'Duke' Ellington in BBC children's drama The Story of Tracy Beaker, was standing in for fellow star Hannah Waddingham who was indisposed and had been unable to appear in the matinee.

The cake acknowledged that the current production was a play-within-a-play musical featuring The Taming of the Shrew by being decorated with the words 'Brush Up Your Shakespeare' and musical notes.

The traditional cake cutting, which took place on the second floor outside the Lilian Baylis Circle, is organised by the Vic-Wells Association which continues the custom revived ninety years ago by Lilian Baylis.

The famous theatre manager boosted fund-raising by asking guests to guess the cake's weight for a small fee.

Those who have cut the cake in past years include Janie Dee, Ian McKellen, Edward Hall and David Suchet. In 1923 the first cake was cut by Lilian Baylis after it had been carried in a procession round the theatre.