David Suchet took a break from rehearsals for Complicit to cut the Twelfth Night cake at The Old Vic. 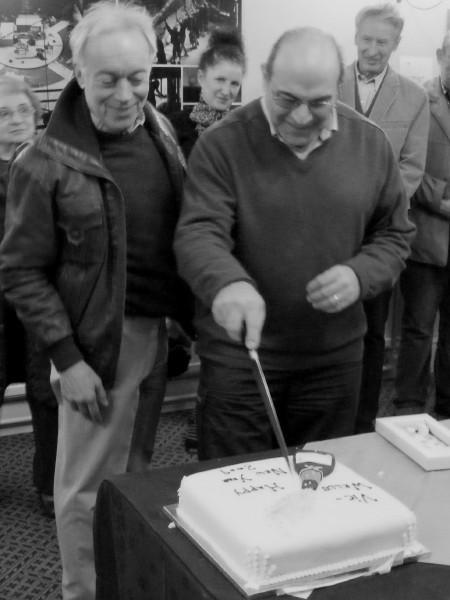 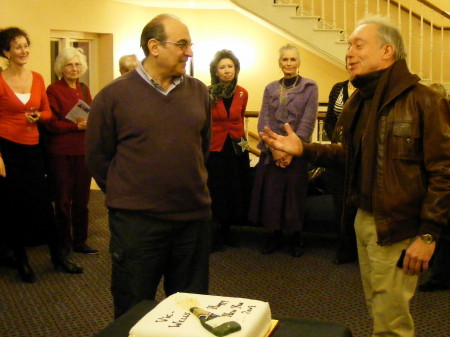 "I want to tell you what this theatre means to me because it's part of the reason why I became an actor," confided David Suchet who was taking part in a tradition begun by Lilian Baylis in 1923.

"I used to come here as a young boy and queue like everybody else to see the great productions.

"My first performance here as a professional actor was Salieri and I had already seen Paul Schofield do it.

"I will never ever forget walking through the stage door. It was the most amazing experience for me being here for that time playing Salieri, having had that experience as a young boy. It was just overwhelming.

"One of the most wonderful things that ever happens to me in the theatre has nothing to do with performances. It has to do with some of the people who work here.

"Steve on stage door said 'Hello David' and handed me my key to my old dressing room. That meant so much to me. That meant I am home.

"That is what this theatre is. It's one of the most prime theatres we have in London. It used to be our national theatre and so for all of us it used to be home.

"Now under Kevin [Spacey] it has a completely new life – a very exciting life. Now it's theatre in the round.

He said he was having a wonderful time playing an American lawyer in what he described as Joe Sutton's "extraordinary" new play which is in preview prior to opening on Thursday 22 January.

Last week Suchet received the Freedom of the City of London at Guildhall. After Complicit he will begin filming a new series of Poirot.

By tradition the party was organised by the Vic-Wells Association founded by Lilian Baylis. Fellow actor Nicholas Grace, who had appeared on stage at The Old Vic with David Suchet, was invited to assist in the cutting.

The cake was made for the third year by Yvonne Hickman from Walkern in Hertfordshire who was delighted to be present having missed seeing her 2008 cake cut by Sandi Toksvig. This year the portion for the cast was decorated with a champagne bottle.

The Old Vic and the Theatre Royal Drury Lane are the only London theatres to maintain the tradition of holding a party and cutting a cake on the last day of Christmas.