As the National Theatre celebrates its 50th anniversary year, a temporary auditorium called 'The Shed' will open in Theatre Square. 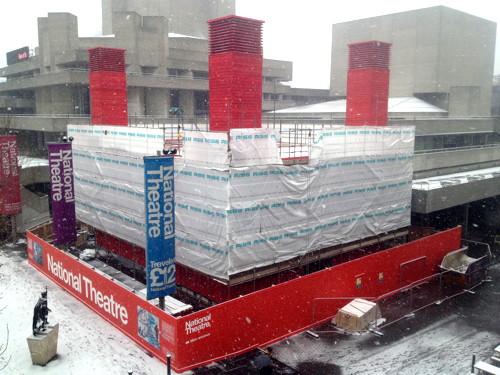 The Shed pictured during recent snowfall

Over the winter a striking new structure has been taking shape in Theatre Square, the riverside piazza next to the National Theatre.

Now the NT has announced that the temporary 250-seat auditorium will be known as 'The Shed' and will will present new work by theatre-makers familiar to the NT as well as emerging voices.

The Shed will enable the NT to maintain a full programme during the closure of the Cottesloe Theatre between February 2012 and April 2014. The revamped auditorium will be known as the Dorfman after Lloyd Dorfman.

The 50th anniversary of the National Theatre company’s first performance at the Old Vic in October 1963 will be marked in the autumn by a performance broadcast from the Olivier Theatre on BBC Two and two Arena documentaries on BBC Four, as well as the publication of a book, The National Theatre Story by Daniel Rosenthal.

The first phase of construction work for the NT Future redevelopment project – a new production centre, the refurbishment of the Cottesloe and the creation of the Clore Learning Centre – has begun.

The theatre has launched an audience appeal to find the Ł9 million which still needs to be raised.