Transport for London has spent tens of thousands of pounds on newspaper and radio advertising extolling the virtues of the remodelled Elephant & Castle junction. 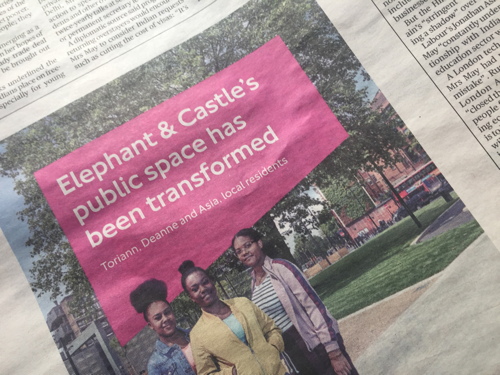 It's nearly a year since the northern roundabout was replaced with a two-way traffic system as part of a £25 million project to remodel the junction.

Over the summer Transport for London has been running newspaper advertisements promoting the new "public spaces with new seating and greenery" at the redesigned junction.

Radio ads have also been aired on stations including talkSPORT and LBC.

Responding to a Freedom of Information Act request from the SE1 website, TfL confirmed that between July and October it spent £49,388 on press space and £37,465 on radio airtime to promote the Elephant & Castle junction.

Mr Holmes also spoke about plans to adjust the southern junction at Elephant & Castle to improve the flow of northbound buses from Walworth Road towards the northern junction.

Last week the first new trader appeared in the new public space at the Elephant. Feed Slider Grill sells gourmet burgers for £6 each from a converted horse box parked outside Metro Central Heights.