Transport for London has set out a new timetable for major changes to the transport infrastructure at Elephant & Castle. 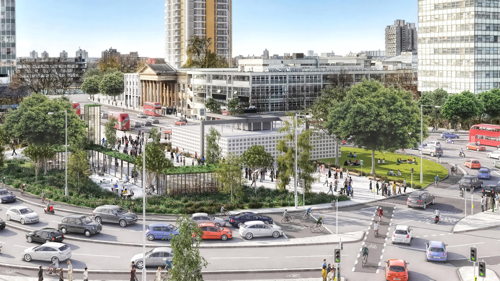 This image of the new-look junction was published earlier this year, although the final look-and-feel will be subject to more consultation this autumn

Last week TfL published a detailed 125-page report on its recent public consultation on plans to remove the northern roundabout and fill in the pedestrian subways.

Now it says that it plans to go ahead with the plans to create a new-look junction with surface-level pedestrian crossings and work is scheduled to take place between spring 2015 and summer 2016.

"Our radical plans for Elephant & Castle will not only make it safer for cyclists and pedestrians, but they will also transform it into somewhere that people will want to gather and interact," said Isabel Dedring, Deputy Mayor for Transport.

"We are now eager to begin construction work so that we can unlock the true potential of this area, leading to more homes and jobs."

Cllr Mark Williams, Southwark's cabinet member for regeneration, planning and transport, said: "Transforming the roundabout at Elephant & Castle is a significant step towards making the area safer for all our road users, particularly vulnerable ones like pedestrians and cyclists.

"It is also a big part of our own plans for the regeneration of the area and bring new homes, businesses and public open spaces to the area so I am pleased that so many of our residents got involved in the consultation and agreed with the proposals.

"I am also happy that TfL is looking into making the road 20 mph, which complements the council's own roll out of a 20 mph scheme on our roads across the borough."

The London Cycling Campaign was among the critics of the scheme, describing TfL's proposals as "unacceptable".

Simon Hughes MP was one of those who objected to TfL's plans, urging them to consider retaining at least some of the subways.

He said: "I am disappointed and confused by the response by Transport for London to the replies to their Elephant & Castle consultation.

"The high approval figure TfL claim for their plans seem very odd, as many residents I spoke to earlier in the year were very negative about at least part of the plans.

"It appears that TfL and Southwark Council are together determined to drive through their plans and quickly implement the new roundabout despite major concerns of local residents and business owners.

"I am arranging to meet soon with local residents and groups to hear their reactions to this consultation, and I will robustly put all continuing concerns to TfL in the weeks ahead."

TfL says that further consultation on the look and feel of the revamped junction will be carried out later this year.

The changes to the road layout at the northern roundabout are only part of the jigsaw of transport upgrades planned for Elephant & Castle in connection with the construction of hundreds of new homes in the area.

Last month City Hall published a new document giving 2020 as the timescale for works to the London Underground station at Elephant & Castle, to include "significant upgrade to Northern line entrance including new ticket hall, capacity upgrade and step-free access".